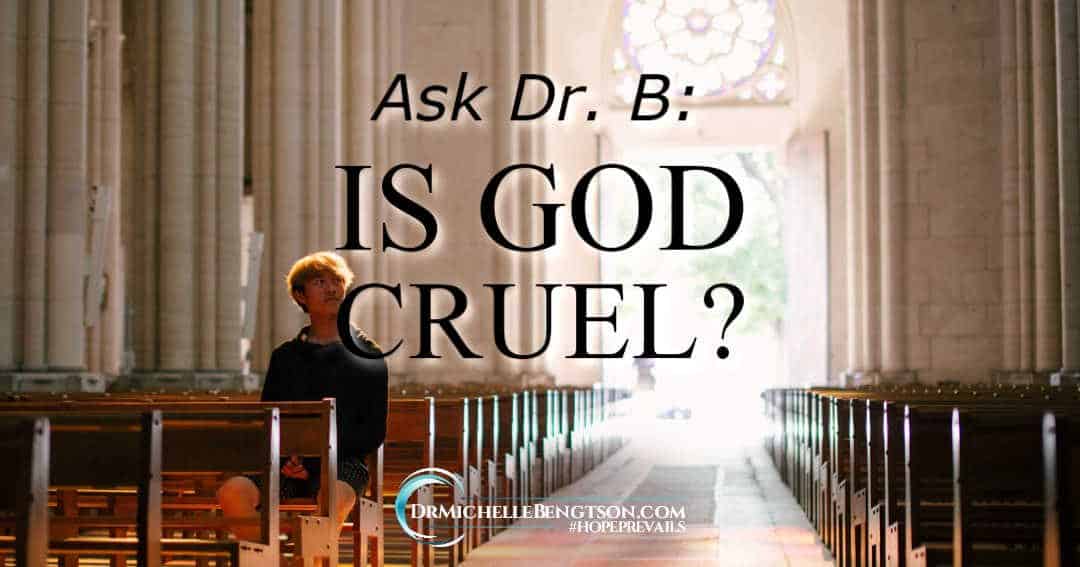 Recently a reader contacted me after having read one of my blog posts. In part she said, “Is God not cruel? I very much see God as cruel. He took the life of the only person in this world that loved me. My husband, by the way, was a very healthy man. Destroyed my life and now has made me sick. I have no money or insurance. This has been going on now for six years. Is that not cruel? I pray and pray and pray and nothing! I have no hope or future. I believe after over six years nothing will ever change.”

My heart was burdened for this reader, and the hope that she so desperately needs. I have been in the place before where I longed to see God move, to act on my behalf, to take my pain away. This reader deserved to have an answer, one that would provide hope.
Today we have the pleasure of reading my husband, Scott’s response to this reader’s question. I pray you will be as blessed as I was by the words he penned:

The reader’s assertion stayed with me for days after I heard it. She stated that God had taken her spouse and her health, and had destroyed her life. For this she believes God to be cruel.

First, I want to thank the reader. I don’t know if she really believed this, or if this was just a rant, but either way, she offered a question that many ask, “Is God cruel?” Some who ask this point to the ubiquitous suffering in this world and conclude without further thought or questioning that God is either cruel, ineffectual, uncaring, or non-existent.

Is #God good? Or, is He cruel? #faith #HopePrevails

That’s a big topic, and more than we have space for here, so let’s assume that God exists, and he’s powerful and interested enough to work effectively in this world. That leaves the question of whether God is good or cruel.

The classic argument, and the scriptural argument, is that God is good. Psalms 34:8 urges us to “taste and see that the Lord is good.” As an aside, here, David implies that knowing God’s goodness (or even knowing THAT He is good) comes from personally seeking it, and not primarily from being told about it. In the Sermon on The Mount, Jesus himself tells us that God provides the blessings of light and rain on the just and the unjust alike, and again endorses the idea of discovering God’s goodness personally with his statements to seek and find. James tells us that every good gift is from the Father, who doesn’t change. By extension, affirms that God is always good, and incapable of being evil or cruel. Why does this matter? Because this means that along with being good, God is trustworthy. He won’t “flip” on us.

Yeah, but…then why is there so much suffering in the world? Perhaps more relevant to the original commenter, why is there so much suffering in my life? Isn’t this evidence that God is evil, or cruel? Others have addressed this, and I don’t have much to contribute to their arguments, so I’ll just call out this article (The Problem of Evil is Often a Problem of Understanding) and this review (Why Doe God Allow So Much Suffering and Evil). I will point out, however, that God didn’t promise us freedom from suffering in this world. James addresses this in the first chapter of his book. Twice in John (ch 13 & 15), Jesus tells his disciples that “the servant is not greater than his master…” He suffered, so we can’t expect some miraculous immunity from suffering.

This is truth, but so far it lacks grace, so it’s an incomplete answer. Jesus was “full of truth and grace…” (John 1:14), and even as he confronted (and continues to confront) the world with truth, he simultaneously offers grace. In the case of suffering, he was there first. He suffered for us. Isaiah 53:5 states, “he was pierced for our transgressions, he was crushed for our iniquities; the punishment that brought us peace was on him, and by his wounds we are healed.”

#Jesus suffered for us. He was pierced for our transgressions. Isaiah 53:5 #BibleVerse 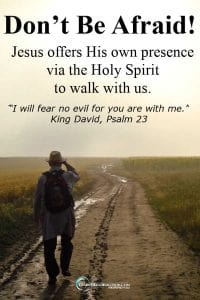 #Jesus offers His presence via the Holy Spirit to walk with us in Psalm 23. #Bibleverse

He offers his own presence via the Holy Spirit to walk with us. David in Psalm 23 famously writes, “… I will fear no evil for you are with me,” and Isaiah 43 powerfully reminds us that when we “go through the waters…” (Old Testament-ese for suffering,) he will be with us. Just one verse later in Isaiah 43, God reminds us of his own character, and uses a term for himself that was relatively novel to Old Testament listeners. He calls himself “Your Savior.” He will rectify things, he will redeem the suffering, he will make all things right (Is 61). There is a promise to an end of suffering. We know about the sacrifice of Jesus, and we have the benefit of the personal presence of the Holy Spirit, so we can understand things better than Isaiah’s listeners did, but we haven’t yet experienced the full freedom from suffering. In Romans 8, Paul describes all creation as “groaning as in the pains of childbirth…” and not just creation, “but we ourselves, … groan inwardly as we wait eagerly for our adoption to sonship.” In other words, we all want to be someplace better, and we are all still dealing with stuff we don’t want to deal with.

#God is good and trustworthy. He gave His son to make redemption possible. #faith

Finally, to the reader and others with the same question, I can’t fix your suffering, and I can’t offer an emotional salve that will make you say, “ahhh, that feels better.” What I can say is this:

When Job enumerated his sufferings to God, God responded. He showed Job who he was, and He engaged Job in relationship. God is a big boy. He is able to handle whatever you tell him, yell at him, or stomp your feet about. He won’t be surprised or upset. Ask Him to show you his goodness. As David and Jesus both declared, the greatest reward will be in seeing this for yourself.

Ask #God to show you his goodness. Seeing this for yourself carries a great reward. #faith

Because of Him, #HopePrevails!
Scott and DrB

“As a counselor, I have read many books on depression, but I have never read a book that deals with the spiritual aspect of healing as thoroughly as does Hope Prevails. Dr. Bengtson draws from her own personal journey as well as her professional experience. I highly recommend this book for anyone who has tasted the pain of depression or knows a friend who is depressed.”