Do You Want to Get Well? 5 Important Lessons on Healing 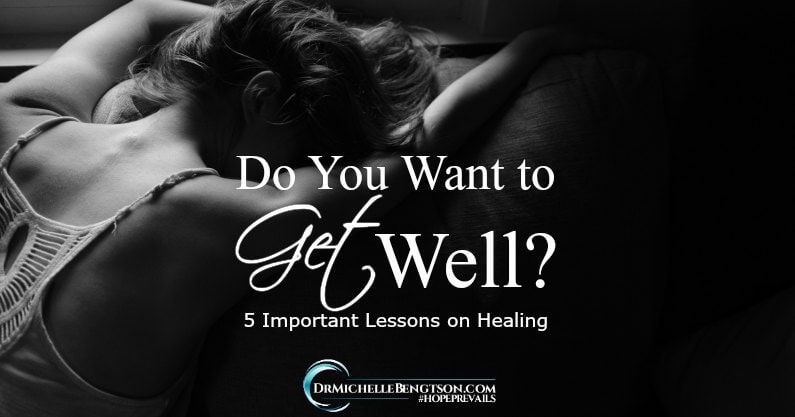 Do you want to get well? Healing often takes work. Hard work. Whether you are going through depression, anxiety, low self-esteem, or a physical illness, there IS hope. You can get well. Even though it may take hard work, it’s worth it. Do you want to be well?

Pool of Bethesda Sermon in John 5

I have really come to love the sermon in John 5 about the lame man at the pool of Bethesda. God has shared some insights with me as I have studied that passage over the years.

“Now there is in Jerusalem by the sheep gate a pool, which is called in Hebrew Bethesda, having five porticoes. In these lay a multitude of those who were sick, blind, lame, and withered, [waiting for the moving of the waters; for an angel of the Lord went down at certain seasons into the pool and stirred up the water; whoever then first, after the stirring up of the water, stepped in was made well from whatever disease with which he was afflicted.] A man was there who had been ill for thirty-eight years. When Jesus saw him lying there, and knew that he had already been a long time in that condition, He said to him, “Do you wish to get well?” The sick man answered Him, “Sir, I have no man to put me into the pool when the water is stirred up, but while I am coming, another steps down before me.” Jesus said to him, “Get up, pick up your pallet and walk.” Immediately the man became well, and picked up his pallet and began to walk.” (John 5:2-9 NASB)

I am a neuropsychologist with over 20 years of experience in private practice. People come to my office all the time seeking to get well from whatever ails them, whether it’s depression, anxiety, bipolar disorder, concussion, strokes, seizure disorders, or some other medical or mental health issue. They all come to my office because something is going wrong in their life and they want to get well.

Jesus asked the lame man, “Do you want to get well?”

In the early stages of my career, I thought, “Jesus, that’s an interesting question that you would ask the lame man, ‘Do you want to get well?’” because in my mind, I would always think, “of course he did…he was at the pool, just waiting for someone to gently push him in so he could be healed.”

But the longer I have been in private practice, the more I have come to realize that the truth is that not everyone really does want to get well. Some people are more comfortable in their known discomfort than they are willing to risk the discomfort of the unknown to get well. Some are afraid of the unknown. Some people come to the pool but they just want to be seen in their sickness.

Do you ever wonder why Jesus asked the lame man, “Do you want to get well?” Do you think the answer was obvious? #healing #mentalhealth

There are a few very important lessons from this passage.

5 Important Lessons on Healing from John 5

First, scripture says that “whoever then stepped in first was made well.” The lame man couldn’t step in by himself, but he exhibited great faith because he stayed there waiting for his miracle to get healed.

Second, he had been waiting, ill for 38 years. Yet he never gave up hope that he would be made well.

I don’t know what you’re dealing with today. I don’t know what you’re praying for. I don’t know if you are dealing with a physical illness, a mental illness, a relationship in need of repair, financial strain, or some other area of your life that is in need of a miracle, but we can look to this man as an example. He didn’t give up for 38 years. That’s a long time to keep hoping in the Lord, but he didn’t give up, and he was ultimately rewarded for that because if he had given up and stopped coming to the pool, he wouldn’t have been there when Jesus was there and he wouldn’t have received his healing.

Even when the journey is long, never give up.

3.) Jesus knew the condition the man was in and He knows ours.

Third, Scripture says that when Jesus saw him lying there, He KNEW he had been in that condition. The lame man didn’t have to tell him. Jesus didn’t have to ask the doctors for the man’s medical history or report. Jesus knew. And Jesus knows our condition as well—we don’t have to tell Him, He knows.

He knows the condition that you’re in today. He loves it when we share with Him. He loves for us to come to Him in prayer, but He already knows. He knows you, He sees you. His heart breaks when your heart breaks.

5.) The lame man had to act first before healing came

Because, fifth, Jesus told him to do something FIRST (to get up, pick up his pallet and walk) and THEN he was made well. The lame man had to first exercise faith, and then he had to do the hard work on the way to getting his healing. Then he was rewarded and made well. It’s hard work sometimes, but God rewards obedience.

My heart is burdened right now because I know so many who are struggling in the pit of depression. I know many who are preparing to start the Hope Prevails Bible Study, the companion to my book Hope Prevails: Insights From a Doctor’s Personal Journey Through Depression. My heart is burdened to pray for them because they are about to embark on a journey to healing, and do the hard work. But I’m so proud of them because they have gotten to the point where they are tired of the suffering that depression brings and they’ve raised their hand, even if it is just a little bit, to say “I’m ready to do the hard work.” I just know God is going to reward them for that and He is going to bring His help, and His hope, and His healing. God is going to do a mighty work in them just like He did for the lame man, and for me.

There’s always a risk in getting well, but the payoff is beautiful.

Sometimes God calls us to do hard work before healing comes

Regardless of what you’re going through now, whether it’s depression, or anxiety, or relationship difficulties, or financial or job difficulties, there is help and there is hope, but sometimes God calls us to do the hard work before we see the manifestation of our healing.

If you’re willing to do the hard work, He will bless it! But the first and hardest question you must answer is: Do you want to get well?

Do you want to get well? 5 important lessons on healing from the pool of Bethesda sermon in John 5. #healing #mentalhealth

Hope-Filled Perspective: Depressed? You can still rejoice because God sees you

Hope-filled Resources for healing from depression.