Facts vs. Truth: Placing All Our Faith in God’s Truth 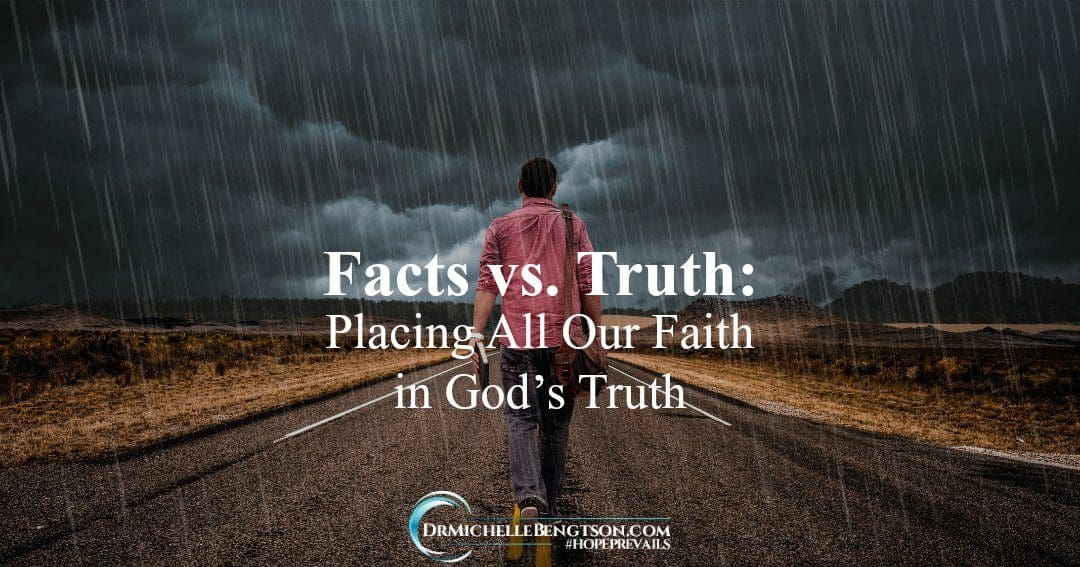 I remember, as a fifteen-year-old girl, when my mother told me that my father had died in the night. My first thought was, “What do I have to do to help the family make ends meet.” I experienced fear for our survival. My father had been the breadwinner for our family, and my mother was from another country without any advanced education or employable skill. While not very sophisticated, my fifteen-year-old mind immediately began plotting and planning to babysit more, mow more lawns, and clean more houses until I’d be able to get a “real job” after I turned sixteen.

From the day of my father’s death until a couple decades later, I allowed fear to instill a scarcity mindset at my core. I began to believe, “if it was to be, it was all up to me.” At the time, I believed God could have prevented my father’s death, so since he didn’t, how could I trust Him to care for my family and provide all we needed? Instead, I took it upon myself to be the provider—a role God never intended for me to assume.

As someone who has experienced lean times, as well as the pain of loss and devastating life circumstances, I have a great deal of compassion for the widow of Zarephath discussed in 1 Kings 17. Elijah was one of God’s prophets at the time, and he had prophesied to King Ahab that for the next few years no rain would fall. God directed Elijah to hide by Kerith Brook, where God would provide water from the brook and ravens would bring him bread and meat twice a day.

Eventually, the brook dried up and God instructed Elijah to go leave his place of provision and live in the village of Zarephath. There God would instruct a widow to feed him instead of the ravens. When he arrived there, he came upon a widow gathering sticks. He asked her for a cupful of water. Before she was even out of earshot, he added, “Bring me a bite of bread, too.”

Scripture doesn’t tell us if Elijah knew anything about her situation, but from the account, it certainly sounds like Elijah got on her last nerve. She shouted back at him, “I swear by the LORD your God that I don’t have a single piece of bread in the house. And I have only a handful of flour left in the jar and a little cooking oil in the bottom of the jug. I was just gathering a few sticks to cook this last meal, and then my son and I will die” (1 Kings 17:12 NLT).

Can’t you just imagine her anguish over her lean conditions and the desperation in her heart knowing that she and her son were one meal away from death? How frustrating, irritating, and aggravating to have a strange man ask her for something she intended to give to her own flesh and blood as if he was oblivious to her lack.

Elijah’s request invoked a bit of worry, fear, and anxiety in the widow. She had already lost her husband to death, she had only enough oil and flour to bake one last morsel of bread for her and her son, and then they to would die. Can you imagine what it would be like to cook your last meal, knowing that you and your child would die a slow and torturous death by starvation, while your child begged you for food when you were powerless to provide? To add insult to injury, a stranger comes along and asks for water during a drought, and a bite of food for himself.

We know she suffered with worry, fear, and anxiety because Elijah countered her fear with, “Don’t be afraid! Go ahead and do just what you’ve said, but make a little bread for me first. Then use what’s left to prepare a meal for yourself and your son. For this is what the LORD, the God of Israel, says: There will always be flour and olive oil left in your containers until the time when the LORD sends rain and the crops grow again!” (1 Kings 17: 13-14 NLT)

She must’ve thought he had a lot of nerve telling her not to be afraid, demanding that she feed him first before her starving son, and prophesying that there would be a continuous supply of oil and flour where she had only the dregs on the bottom and sides of her jars. Yet, she did as Elijah requested. After she did, she miraculously experienced God’s provision as she continued to eat every day for over a year while the drought continued.

Despite the continual supply of flour and olive oil, her son became sick and died. Despite God’s faithful provision of food for the widow and her son, she became wracked with anxiety, lacked the faith needed and blamed Elijah as she cried out, “O man of God, what have you done to me? Have you come here to point out my sins and kill my son?” (v. 18 NLT)

Elijah took her son into his arms, carried him upstairs, and laid the body on his bed. It was then his turn to cry out to God, “O LORD my God, why have you brought tragedy to this widow who has opened her home to me, causing her son to die?” (v. 20 NLT) He laid on top of the boy three times while begging God to breathe life back into his body. God did as Elijah asked and revived the boy. Through this encounter, the woman’s faith in God was strengthened, “Then the woman told Elijah, “Now I know for sure that you are a man of God, and that the LORD truly speaks through you” (v. 24 NLT).

Have you ever experienced God’s provision in one area of your life, but then seemingly forgot about His faithfulness when you encountered a difficulty or challenge in another area? It can be so difficult to maintain our faith and trust in God when compelling facts present themselves before us (i.e. the woman only had enough flour and oil for one more meal, or when the woman’s son lay lifeless). 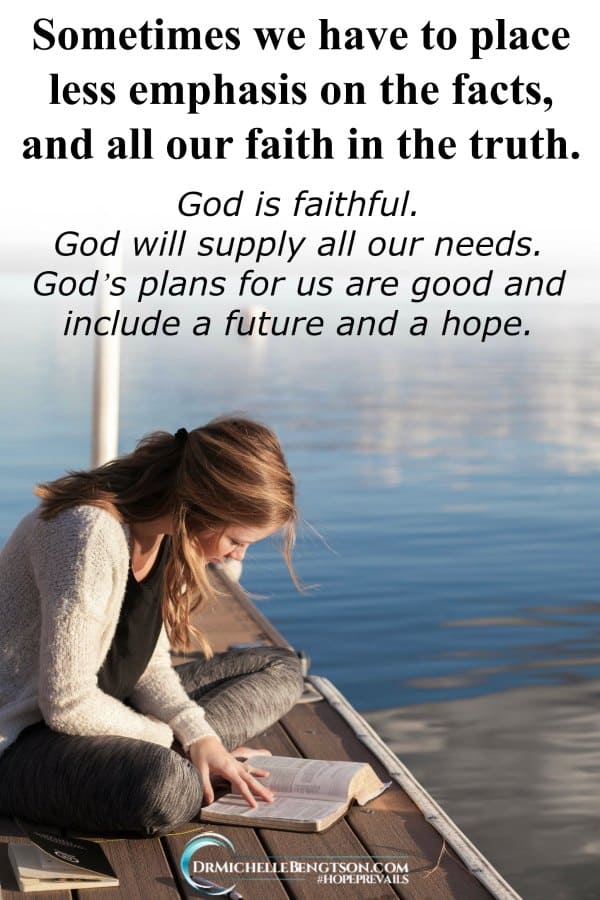 The facts may be that there is more month than paycheck, that tests reveal the presence of cancer, that a spouse has not remained faithful, that a child is in prison, etc. But the truth is that God is faithful, He promises to supply all our needs, He has declared that HIS plans for us are good and include a future and a hope.

Facts vs. Truth: Placing All Our #Faith in #God’s Truth. #trustingGod

Sometimes we have to place less emphasis on the facts, and all our #faith in the truth. #trustGod