God Can Use Even Our Storms for Good! 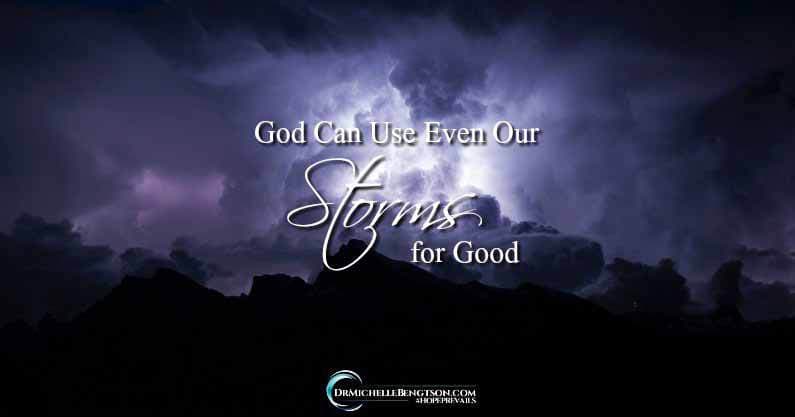 Recently we’ve gone through several storms—both literal and figurative. I know many of you prayed for our family as we evacuated our son from his university for Hurricane Irma as it threatened the entire state of Florida, and we were unsure exactly where it was going to hit or how bad the devastation would be. We are grateful for your prayers and your many offers of assistance to him.

But I’ve been doing a lot of thinking lately about the storms of life and how we get through them. We all have them—whether they are literal storms like hurricanes, or figurative storms like relationship difficulties, or health crises, or financial woes. The Bible warns us that the storms, the trials, will come. No one is exempt.

The #Bible warns us that the storms, the trials, will come. No one is exempt. #trustGod

As I’ve been pondering our journey through life’s storms, the Lord gave me some new insights recently through the story of Jonah.

“The LORD gave this message to Jonah son of Amittai: “Get up and go to the great city of Nineveh. Announce my judgment against it because I have seen how wicked its people are.”

But Jonah got up and went in the opposite direction to get away from the LORD. He went down to the port of Joppa, where he found a ship leaving for Tarshish. He bought a ticket and went on board, hoping to escape from the LORD by sailing to Tarshish.” (Jonah 1:1-3)

How often do I run the other way, in my rebellion, trying to escape from the Lord? I know that I’m ultimately always going to end up having to go in the direction that He wants me to go, but so often I delay being obedient because of fear or anger.

“But the LORD hurled a powerful wind over the sea, causing a violent storm that threatened to break the ship apart.” (Jonah 1:4)

This made me think of the recent hurricanes, especially Hurricane Irma. I watched the news and the weather reports for days before it hit the Caribbean islands all the way through until it hit our mainland tracking its progress. Having survived a hurricane before, I imagine the storm that Jonah and the sailors faced was much like those that have hit the United States and the Caribbean Islands in recent weeks.

“Fearing for their lives, the desperate sailors shouted to their gods for help and threw the cargo overboard to lighten the ship.

But all this time Jonah was sound asleep down in the hold. So the captain went down after him. “How can you sleep at a time like this?” he shouted. “Get up and pray to your god! Maybe he will pay attention to us and spare our lives.”

Then the crew cast lots to see which of them had offended the gods and caused the terrible storm. When they did this, the lots identified Jonah as the culprit. “Why has this awful storm come down on us?” they demanded. “Who are you? What is your line of work? What country are you from? What is your nationality?”

Jonah answered, “I am a Hebrew, and I worship the LORD, the God of heaven, who made the sea and the land.”

The sailors were terrified when they heard this, for he had already told them he was running away from the LORD. “Oh, why did you do it?” they groaned. And since the storm was getting worse all the time, they asked him, “What should we do to you to stop this storm?”

“Throw me into the sea,” Jonah said, “and it will become calm again. I know that this terrible storm is all my fault.”

Instead, the sailors rowed even harder to get the ship to the land. But the stormy sea was too violent for them, and they couldn’t make it. Then they cried out to the LORD, Jonah’s God. “O LORD,” they pleaded, “don’t make us die for this man’s sin. And don’t hold us responsible for his death. O LORD, you have sent this storm upon him for your own good reasons.”

Then the sailors picked Jonah up and threw him into the raging sea, and the storm stopped at once! The sailors were awestruck by the LORD’s great power, and they offered him a sacrifice and vowed to serve him.” (Jonah 1:5-16)

Much like the sailors in this story, when bad things happen, we are always so quick to look for someone to blame. But we live in a fallen world. When the hurricanes have hit, I read so many commentaries about why they were coming. Some were saying it was God’s wrath on us because of our sin. Some theorized it was the devil causing them. Some hypothesized that the storms were due to global warming. Theories were plentiful. In actuality, only God knows the reason.

But whether it is physical storms like hurricanes or earthquakes or wildfires, or it’s the storms we are going through in life like health crises, or financial hardship, or relationship difficulties, the truth of the matter is that Jesus told us that we would face trials.

That’s what the enemy wants. He wants us wasting our energy casting blame rather than looking to God for our refuge.

Another thing that I found so interesting was that Jonah had already told the sailors that he was running from the Lord, yet they forgot that little piece of information. They threw all of their cargo overboard except their dice. They resorted to rolling dice to try to determine the reason for their hardship and who to blame. They weren’t looking to the one true God for their answer. They were looking to their false gods and coming up empty.

Jesus said our Christian walk wouldn’t be easy, and that we would face storms, but He said we can take heart because He has overcome it all.

The last thing that caught my attention was that at the very end of the story, it says that the sailors vowed to serve God! God used even their storm for good. What the enemy intends for harm, and for evil, God will use for good. And God will do that in our storms as well.

I don’t know what you are facing today, but I pray that this gives you hope that through your storm, whatever it is, that you will turn to the one true God and that through it God will use it for good! And when He does, I’d love to hear about it!

What the enemy intends for harm, and for evil, #God will use for good. And God will do that in our storms as well. #trustGod #faith

“Dr. Michelle Bengtson sent this ball over the fence! Hope Prevails is the most helpful and practical thing I’ve read on dealing with depression! A compassionate filled work from someone who’s been through the struggle personally. This is a must have resource for anyone struggling with depression or for those who know someone who is. Armed with Scripture, Dr. Bengtson gives step-by-step strategies for combating the lies of the evil one. Hope is on every page!”