How To Get Through a Devastating Diagnosis 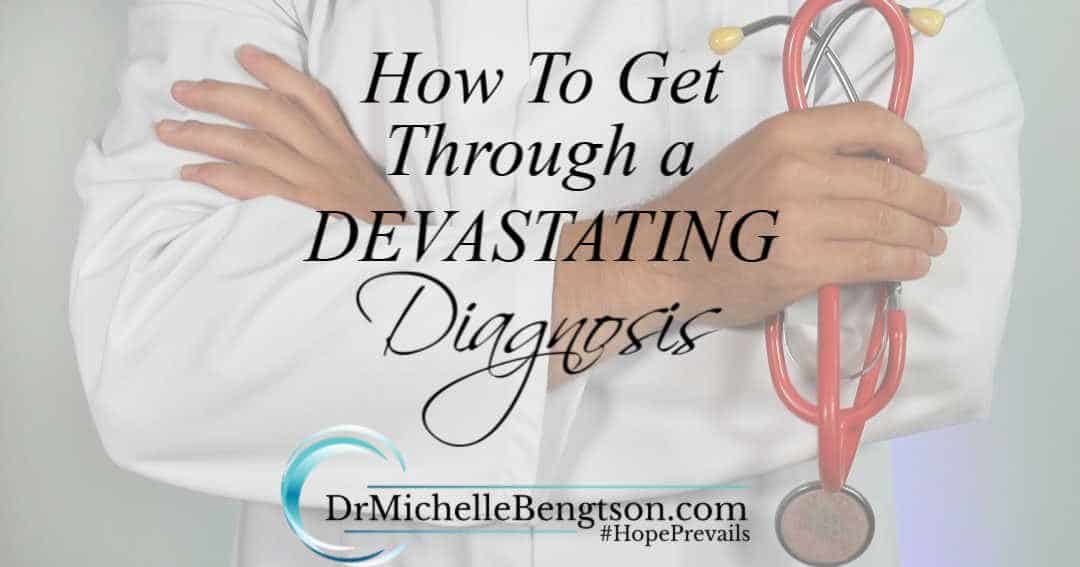 On a recent episode of Your Hope-Filled Perspective with Dr. Michelle Bengtson (Hope for the Fight Against Cancer), I had the opportunity to sit down and have an open discussion with my husband, Scott, about the time several years ago when he received a devastating diagnosis of cancer, when the doctor declared “I’m sorry Mr. Bengtson. You’re too young for this.” Many have asked us how we maintained our hope in the midst of such a devastating diagnosis. I’ve asked Scott to share a bit more here about what enabled him, as the patient, to continue in the face of such a hard trial.

Scott Bengtson, a 3-time cancer survivor,  shares on the blog how to get through a devastating diagnosis. #cancer

The most significant difficulty that we talked about was my cancer diagnosis at age 39, just two years after we had managed to relocate under the same roof following four years of a commuter marriage, and only about a year after the birth of our first child. I got the first hint of something non-routine when I got a call from a specialist, the doctor himself, and it was after hours. I couldn’t tell you the details of the call, but I remember him saying at the end of the call, “I’m sorry Mr. Bengtson. You’re too young for this.” I remember that the house was empty when I received that call, and I wandered around for a long time wondering how I was going to tell Michelle, as the sun set and darkness crept in. Ironically, that physician’s name was Dr. Graves.

The diagnosis was of a rare type of cancer, and the doctors offered a grim prognosis. The first oncologist we visited spread his hands and suggested that I “get my affairs in order.” When we asked, he offered about two years as a median survival time. We didn’t go back to him. My general practitioner was honest without being negative or frighteningly dramatic, and he was positive without being unrealistic. Still, the best thing I heard from him was, “You are going to be a case study.” Hmmm.

That call happened on a day that I was at a corporate retreat that was intended to be positive and fun. My colleagues were all engaged with whatever silly icebreaker or team challenge was going on, and I was wondering: if I’d be around for the event the next year, what this meant for my family, if my son would grow up without a father, and what we were going to do about it all.

This was the worst part of it for me–not knowing, and not having answers, and most of the time not even knowing what the questions were. I had tears and anguished prayers, and I felt a sense that I now recognize as being overwhelmed. I didn’t know where to start or what to do.

Research results I pulled off the internet weren’t just discouraging, they were horrifying. I felt like I was watching a Stephen King movie. I didn’t know how to talk about it, and neither did many of my friends and colleagues. It was upsetting to Michelle and other family members, but ignored by others. Some people wouldn’t talk about it, and some wanted all the details. It biased relationships, and imposed distance with some. At other times I couldn’t recognize sincerity and graciousness when it was present.

The mental bandwidth that the uncertainty occupied, and the continuous focus by others on my diagnosis, well-intentioned or otherwise, made it difficult to maintain normal relationships. Realistically, how do you turn a conversation from discussing a terminal diagnosis to ask, “So how are you doing?” At times I didn’t want to share about my diagnosis, and I sometimes just got tired of talking about it, but then I would feel guilty about that. I was in a depth that I had never known before.

I grew up in church, and I had good examples in my parents and grandparents of what faith in the work of Jesus Christ was, and what it meant in life. I knew I had a relationship with Jesus. I’d had the chance in my little three person junior high Sunday School class to ask some of the common questions about God and a relationship with him, sometimes diagramming them on a small green chalkboard in a little classroom separated from the sanctuary by an accordion-style foldable wall. I found meaningful, thought-provoking answers. I attended a Christian school and was exposed to the structure and stories of the Bible, and heard the narratives of the many believers who lived in relationship with God through the tragedies of life. So I had the answers, but they had never been put to the test in real life.

It wasn’t until much later that I realized how significant this grounding was to me during that time. Very undramatically and almost boringly, I did what I grew up doing—praying, worshiping, spending time with other believers, sitting under good teaching, and keeping my nose in God’s word. I didn’t have to think to do those things, they were reflexive and habitual, and they helped.

I knew, and had known, that God was good, capable, loving, and relational. I knew that the concerns I had for my family originated in Him. He gave me the responsibility and vision for my family, and He would and could handle them, either with or without my presence. He had my best interest in mind, even if it resulted in my death. I’d heard the truth, I’d asked the questions, and I’d gotten the answers. It was easy to believe that death was not the eternal winner. And I knew that heaven was much, much more than the fairy tale, angel wings, hospital gown, and fluffy cloud nonsense that our culture portrays.

This didn’t resolve all my earthly woes. I still became depressed enough to need medication. I went from 170 pounds to a sickly 125. Waking at 2 AM was unusually black. I became phobic of drinking because of the nausea to the point of hospital admission for dehydration. My Thanksgiving dinner that year was a glass of hospital orange juice, and I thought it tasted wonderful.

Even as we walked through the treatment path with all the accommodations and logistics that came with it, I walked the spiritual path that had been prepared for me. This was no great feat of faith, I just did what I knew to do, even without realizing it. I can’t even claim to be some SuperSpiritualDiscipline Superhero Man. Most of my habits and learning were from my parents’ actions, not mine. They just stuck to me. During this time, my relationship with God was not challenged. Instead, that relationship offered stability and hope when the rest of life was overwhelming, uncertain, and terrifying. In fact, my relationship with God grew and deepened during this time, but that’s another story.
My prayer is that when life threatens to overwhelm you with terror and uncertainty, that you will have a relationship with your Father through Jesus Christ that is well exercised, habitual, active, interesting, and vibrant so that you too will have a clear, stable and hopeful path.

If this is confusing, or if you want to know more about a relationship with God, find the link nearby titled “Knowing God-How, Why, and When.”

How do you maintain hope after receiving a devastating medical diagnosis? Read how from a 3-time #cancer survivor. #hope

Other Helpful Resources on Cancer

Practical Grace: What Not To Say to Someone with Cancer (Part 2)

Practical Grace: How To Be a Friend to Someone with Cancer (Part 3)

How To Support Someone with Cancer

10 Lessons Learned After Being Diagnosed with Cancer

The Day I Was Diagnosed With Cancer: 18 Promises to Hold Onto When Crisis Hits

What Cancer Taught Me About the  Church

Hope Prevails Even in Cancer

How Testimonies in the Bible Bolster Your Faith in Hard Times 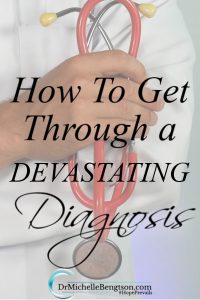