Invisible But No Less Real 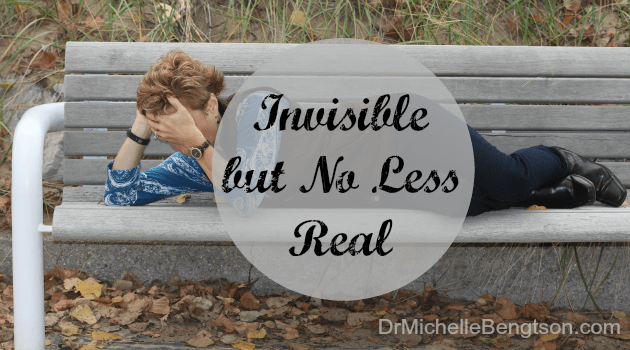 There, I said it.

Don’t worry, you can’t catch it just by talking about it.

But you can make a difference, and you can help tear down the stigma by joining the conversation and admitting it is a problem.

You can help tear down stigma by joining the conversation and admitting it is a problem.

Some don’t realize it is a problem. But that doesn’t mean it isn’t.

It’s my desire to be part of the solution, because each day people are dying and families’ lives are being torn apart. So I wrote a book entitled “Hope Prevails: Insights from a Doctor’s Journey Through Depression” which will be released by Revell publishers summer, 2016, to provide help and hope for those who suffer in the valley of depression.

Just recently someone told me that the “market” for my book was “too small.” You know, not as big as say, the weight loss market. REALLY?? I didn’t write a book for a “market.” I wrote the book for the person who is suffering in the valley of depression and has lost their hope, because I know where my hope comes from and I want them to know that source of hope.

I know where my #hope comes from. I want others to know that source of hope too. #mentalhealth

It is estimated that by 2020, depression is going to be our greatest epidemic worldwide. That’s greater than ADHD and learning disabilities. Greater than cancer. Greater than heart disease.

When someone is depressed gets desperate enough that they don’t think there is any way out of their despair, it’s not uncommon for them to consider suicide. Recently a post circulated around social media about the selfishness of suicide, suggesting that suicide is the most self-centered thing a person can do or that the one who attempts suicide doesn’t care about the people they leave behind.

What such statements really suggest is that when someone attempts suicide, they are ultimately thinking about ending their own pain (even if they truly think others would be better off if they weren’t there). What they aren’t capable, in their pain, of seeing is how much pain others will experience when they are gone. Regardless, I detest comments like this, however, because it also shows a lack of understanding and compassion for the depth of despair someone who is suicidal is experiencing.

I believe that as part of the body of Christ, for the church to be a hospital to the hurting, we must do what we can to tear down the stigma associated with certain taboo subjects, mental health-specifically depression, being one of them.

For the church to be a hospital to the hurting, we must tear down the #mentalhealth stigma.

I’ve been there. I didn’t ask for this to be my ministry field, but it’s a territory God has given me, and as long as I have breath and He has me there, I will do what I can to help the hurting, and share the hope that prevails.

Stigma is perpetuated by a lack of understanding, a lack of compassion, and a lack of willingness to step in and be part of the solution.

Stigma is perpetuated by: lack of understanding, compassion, and action. #EndStigma

No one would choose to be depressed. But often, they get to the point they don’t know what else to do. That’s why I wrote my book, and how I hope it will help. Instead of turning away because you can’t relate or don’t understand, how about you take that first step toward tearing down the stigma and step TOWARD the suffering and just offer a compassionate embrace?

Instead of turning away because you can’t relate, step toward the suffering and offer an embrace

Somehow I think that’s what Jesus would have done.