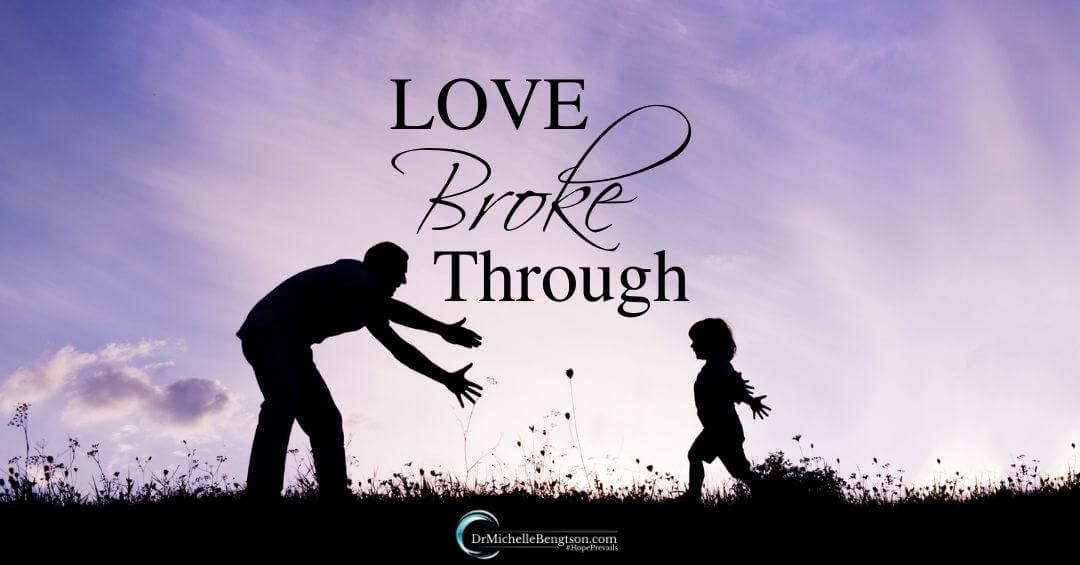 Do you know the Father’s love for you? I’ve seen many patients in my private practice who struggled to love themselves or others. It is only when God’s love breaks through and we receive it that we can love ourselves.

Did my father love me?

I sat in my seat, heart-beat quickening while ever aware of my son and husband next to me.

I had been present when this exercise had been previously done, and had even participated before. “I’m good, Lord. We’ve done this before.”

I’m not sure who I was trying to convince: Him or me.

“My father loved me right? I mean, I remember the photographs. Like the one on the sidewalk where he was crouched down holding me on his knee and my cousin in the crook of his arm.”

It was as if God whispered back, “Yes little one, your daddy loved you, but you’ve wondered.”

My parents did the best they could

My father was a good man. Everyone loved him. The elderly ladies at church always looked forward to their Sunday morning hug. He cared for the orphans and widows in such a tangible way. Friends thought I was so lucky because he was fun when he played and teased. I remember those times too, and they bring a smile to my face.

Yet Dad traveled extensively for work when I was young, often gone two or three or more weeks at a time, in a day when cell phones were not yet invented and long-distance rates were prohibitive.

My other memories of him have been obscured by the heartache that ensued when he died suddenly when I was just an adolescent, leaving a daughter who very much needed her father’s love and acceptance. I then adopted my mother’s frame of reference, who was left to raise two children in a country that was not her own. Oh, how I know she tried, doing the best she could do, but her own emotional demons prevented her from displays of affection, love, or acceptance from the time I was born, and Dad’s death just amplified her emotionally impoverished state. It left me feeling like a burden always precariously trying to ensure her emotional well-being, so as not to risk losing her too.

I don’t blame them for not providing what a little girl most needed. Each in their own way, my parents did the best they could. And I can have grace and mercy toward both of them, because in my own parenting endeavors, I have also done the best I could, but not always providing what or how my children needed. Yet our Heavenly Father is full of grace and mercy despite my mistakes.

He did love me right? I knew he did, or rather, I assumed he did, although as hard as I searched back in the memory vault, I couldn’t remember him ever saying so. And then, he was gone, never again able to utter those words, or “I’m proud of you,” or “You’re beautiful,” or “Daddy will always be here for you,” or anything else a little girl needs to hear her daddy say.

“But Lord, you gave me a replacement father. Surely he loved me.”

Or did he? He had said he did, but then, I only remembered it in response to my profession of love for him first. And then, sometimes someone may say they love you, but their attitudes, comments, and behaviors leave you wondering if it was just lip service.

My heart sank. I had gone through the formality of the exercise before, but this time was different. This time the lump caught in my throat as tears threatened to spill down my cheek in front of my son and husband. I didn’t want my son to think anything other than positive things about his grandfathers.

I sat there glued to my seat, on the one hand so thankful that my sons knew their father loved them. He not only told them daily, unsolicited, but his actions backed it up. He had received his father’s love and had it to give. Yet, on the other hand, I was left to process my own lack.

“Will you let me give you what your heart needs?” I sensed God asking.

The speaker had just asked a question and let us all see the startling statistics in the hands of our brothers and sisters in Christ: “With a show of hands, how many of you never heard your father say ‘I love you’ to you growing up? Or perhaps he did, but his actions told you differently?” As we awkwardly glanced around the room, men and women, young and old, shared their deep heart hurt. Easily 85% had their hands raised. And without conscious thought, my hand joined theirs.

The speaker then invited us to come forward so that he could stand in the gap, and minister to the wounded, gaping hearts present.

Even when we can’t see it, God’s working

Years before, I knew my heart was lacking. I had prayed for quite some time for God to “re-parent” and fill the gap for where my own parents had been unable. I had no idea what that would look like or consist of, but I knew that as a daughter of the Most High God, He would be the only one capable of righting wrongs and filling gaps in my little girl heart. Yet my prayers seemed to go unanswered for the longest time…long enough, in fact, that I quit asking.

As He always is, God had already been at work, but doing an ever deeper work than I had imagined.

In a way that only God could orchestrate, a mother-like figure had contacted me sometime before with a professional question, but we continued casual conversation over time. As I entered a period of adversity, she appointed herself as my personal prayer warrior. I have to admit, I was skeptical. I’d had people promise to pray before, but in actuality, my feeble requests were made to feel like an unwanted burden. So I had no expectations of this relationship.

Yet she persisted: checking in with me and showing genuine concern of a variety I was not accustomed to. But even then, it wasn’t so much what she did, but the heart behind it. Why would she do this for a virtual stranger? Her terms of endearment for me cut through the walls I spent my life erecting. Terms I would have wanted to hear from my own parent.

The sensation within my head and heart was foreign. I hardly had words to describe it. My heart was softening, in a way that it was unaccustomed and more than a little uncomfortable. After 3 significant losses in a 6-week period, I was not too ready to allow my heart to connect to anyone new, only to be left rejected or abandoned on top of the grief I already bore. Yet when she spoke, I could not deny that my heartfelt something I only vaguely recognized: it felt accepted, valued, and loved.

During the same heart-breaking period of time, God also brought a sister-like woman across my path. Again, not a relationship I sought out, nor knew I needed or wanted. She extended affirmation, acceptance, and grace while not asking for anything in return. What was this feeling that welled up inside me?

When Love Broke Through

Scores of women walked alongside me to the front of the room to stand enshrouded in the shame that comes from believing if your own parents didn’t love you, how could others? How could God? The enemy is so convincing as he whispers his lies to a vulnerable heart.

The speaker then called men to stand before each woman to fill the gap for what their own fathers hadn’t done for them. My husband came forward to take that responsibility for me.

He looked into my eyes and repeated a prayer of the Father’s Love for me. Tears welled in his eyes and cascaded from mine down my cheeks. As I heard that he (He) was proud of me, accepted me, and loved me, I also recalled the words of compassion, acceptance, and love from those women He brought across my path and into my life.

I can’t tell you what happened, but I physically felt a shift, as if the walls built from hurt, rejection, and abandonment came up and out of me, while a belief in and assurance of His love for me settled in the vacated places of my broken heart. In that moment, I felt the Father’s love. Even more surprising, I felt a mother’s love. In that exchange, it was as if He had answered my prayers that I had given up on, and re-parented in a way that only He could.

In case I was tempted not to believe that something deep and palpable happened in that exchange, He gave me a couple of other brief experiences that bore witness to the fact that I had not only received His love but could now love myself.

On a break following the exercise, I headed toward the ladies’ room. As I walked past the mirror, I caught a glimpse of a reflection of a woman and had a flash of thought, “she’s pretty.” It was a second later before I realized it was my own reflection. I took a double-take and stood in front of the mirror realizing I had never thought that about myself before.

Moments later, back in my seat in the auditorium, I glanced down at my feet. Without any conscious intent, I heard myself think, “that foot is cute”…the foot that had been considered ugly in my estimation since a life-threatening illness as a child left it deformed and unsightly.

Perplexed by the thoughts that did not seem like my own, I silently asked the Lord what was happening. He gently replied to my vulnerable heart, “You’ve finally accepted my love, now you are free to love yourself as I intended.”

We cannot give what we do not have. Even though I had accepted Christ as my savior as a child, I had never fully accepted the Father’s love for me. Until I did, I was not free to love myself or anyone else. Only when I accepted His love for me, could I love myself.

Do you know the Father’s love for you? Have you received it?

The enemy is so convincing as he whispers his lies to a vulnerable heart. But, when love breaks through and we receive the Father’s love, we are free to love ourselves and others. #mentalhealth

A high percentage of people have never heard their father say he loves them. It is only when we know the Father’s love and receive it that we can love ourselves. #mentalhealth 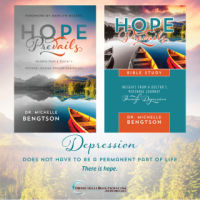 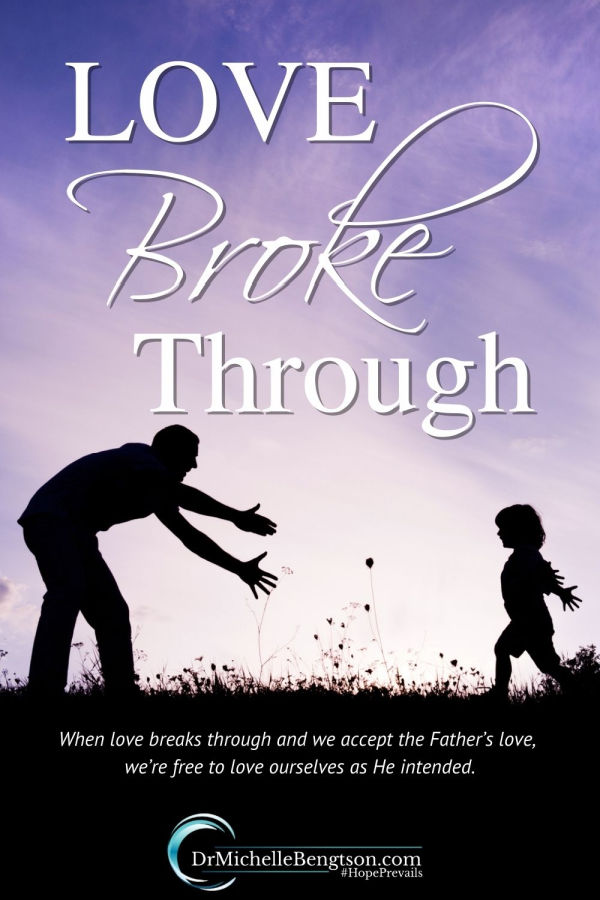