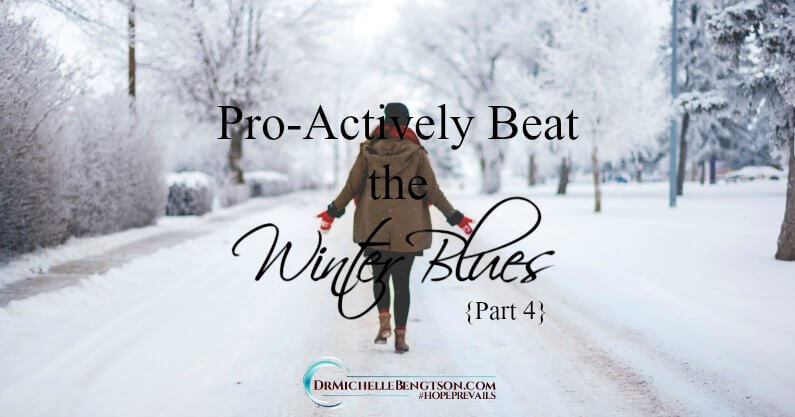 Shorter days, darker skies, and colder temperatures often rob us of our emotional equilibrium and can throw us into the pit with the winter-time blues. Do not be tempted to buy into the lie that there is nothing you can do about it.

In this series we’ve been discussing ways to Pro-Actively beat the winter blues rather than allowing them to take you down.

You can pro-actively beat the winter blues. Don’t allow them to take you down! #depression

Don’t underestimate the importance of Engaging in social activities!

Engage in social activities! God intends for us to be social people. #mentalhealth

It was always God’s intent for us to be social people, interacting, and engaging in the lives of others. We read of the first account in Genesis 2:18 “The Lord God said, “It is not good for the man to be alone. I will make a helper suitable for him.”

In the New Testament Luke shared the relationship people were to have in each others’ lives, “Day by day continuing with one mind in the temple, and breaking bread from house to house, they were taking their meals together with gladness and sincerity of heart, praising God and having favor with all the people” (Acts 2:46-47).

Even Jesus appointed men to be his companions in travel and ministry, who ultimately became his friends. Paul also frequently talked about his friends and companions whom he loved and who met his needs. (Acts 24:23 “He ordered the centurion to keep Paul under guard but to give him some freedom and permit his friends to take care of his needs.”)

We need friends most during difficult times but that is also when we are least prone to seek them out or develop those relationships. Yet we can take our example from Jesus. The night before Jesus died must have been the most heart-wrenching of nights for him. He knew what was to come, he had foretold of it. That night he went into the garden to pray… to socialize with God. But he didn’t want to go alone–he wanted his friends to come with him.

We need friends most during difficult times when we are least prone to seek them. #mentalhealth

Scripture encourages us to remain in relationship, sharing each others’ burdens and allowing others to help shoulder ours: “Two are better than one, because they have a good reward for their toil. For if they fall, one will lift up his fellow. But woe to him who is alone when he falls and has not another to lift him up! Again, if two lie together, they keep warm, but how can one keep warm alone? And though a man might prevail against one who is alone, two will withstand him—a threefold cord is not quickly broken.” Ecclesiastes 4:9-12

The only way to have a friend is to be one. #mentalhealth #depression

During the winter months, and especially during bouts of depression, there is an increased tendency to become socially withdrawn or isolated. The problem then becomes cyclical and worsens when withdrawal and isolating then worsens the depression which in turn promotes further withdrawal. By withdrawing, we risk losing the connectedness we once had, and minimize others’ opportunity to minister to our needs as James suggests. “Therefore, confess your sins one to another and pray for one another, that you may be healed. The prayer of a righteous person has great power as it is working” (James 5:16).

By scheduling social events, we make a commitment to ourselves and to others, and create an accountability system. (“As iron sharpens iron, so a friend sharpens a friend.” Proverbs 27:17) In such experiences, we have the opportunity to help one another grow in our faith, just as Paul encouraged: “That is, that we may be mutually encouraged by each other’s faith, both yours and mine” (Romans 1:12).

Schedule social events. Help one another grow in faith. #mentalhealth

Engaging in social activities, and looking for ways to help and encourage others can actually help decrease our own feelings of loneliness and the blues. Just as Eleanor Roosevelt shared,”Since you get more joy out of giving joy to others, you should put a good deal of thought into the happiness that you are able to give.”

Look for ways to help and encourage other. You get more joy out of giving joy. #mentalhealth 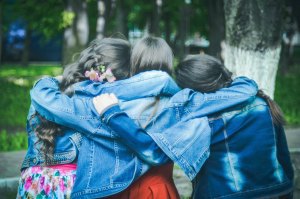 Join me tomorrow as we discuss additional ways to manage the winter-time blues. We’ll get through this together.