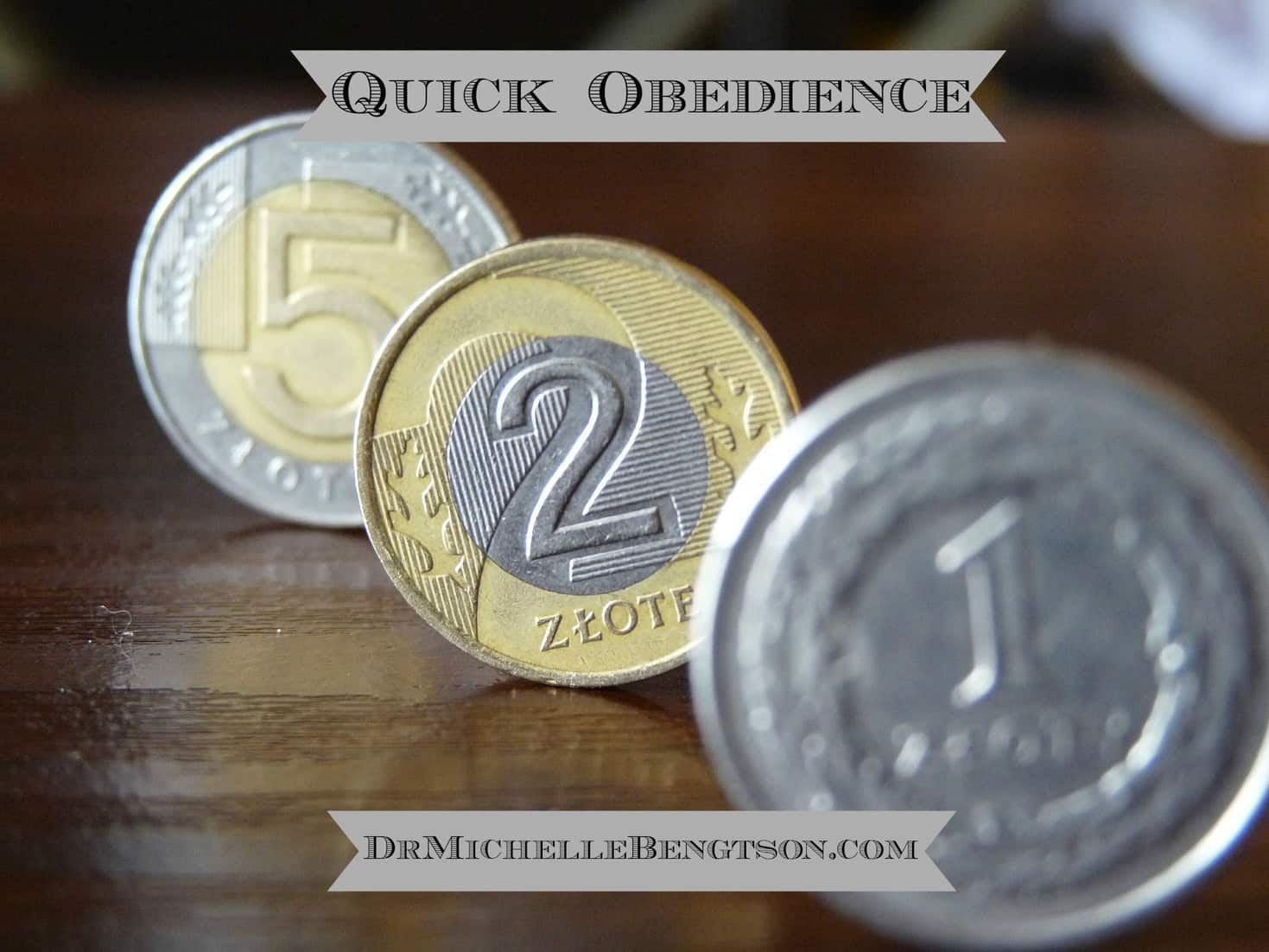 It’s such a big word. A weighty word. A word with significant responsibility attached to it.

If I’m being honest with you, I’ve not always been quick in my obedience to the Lord. I know deep down that His way is always best, yet sometimes I am slow to put into action that truth that I believe.

Perhaps it’s just me. Are you ever slow to obey what you know the Lord wants you to do?

Jesus spoke of others with this same malady.

In the parable of the talents, the master entrusted 5 talents to one servant, 2 talents to another servant, and 1 talent to a third servant. Scripture said he entrusted these talents to the servants according to their abilities.

This story makes me wonder how God views me and my obedience in stewarding what He has given me.

How does God view me and my obedience to steward what He has given me?

As the parable goes, each servant was given his allotted amount based on his abilities. I wonder if the man with only one talent was predicted to poorly utilize his resources based on his prior performance? In mental health they say that the best predictor of future behavior is one’s past behavior. Could it be that the master didn’t entrust the servant with more because his past behavior suggested he would be a poor risk?

Oh how that would grieve me to think that God was not moving me along in my calling, or on my particular life journey because He couldn’t trust me to do the best with what He gives me.

What have my past actions predicted that my future actions will be? Are they pleasing in His sight?

Am I willing to speak about the goodness of God to the store clerk He puts in my path, or will I check my watch and hurry on to my next task?

Will I think before I speak, be slow to anger and quick to listen when my child doesn’t obey or will my frustration from the day erupt at his heart when he tries to explain?

Will I speak the truth in love and let grace abound when I see a friend headed down the wrong path, or will I remain quiet in an effort to not rock the boat?

Scripture says that the servant with one talent judged the master’s behavior and intentions. I had to examine my own reasons for being slow to obedience. At times, my behavior implied that rather than trusting that my Father’s plan for me was good and not to harm me, I acted in a way that suggested I believed my way was best.

Yet just as in the story of the master and the three servants, what the master entrusted to them and what God entrusts to us is God’s. It is not ours to decide with what we will do. It is God’s and as such, it really doesn’t allow for us to insert our own preferences.

What God entrusts to us is God’s-what He wants is our only real option.

When God asked me to write a book, I quickly agreed. When He told me, however, that I needed to tell my own story, I was slower and more reticent to agree with enthusiasm. Yet the truth of it is, my story is only what it is because of what He has done for me. As such, it’s not really an option for me to not share with whomever He leads.

My story is only what it is because of what He has done for me. #mentalhealth

Scripture also says that the man with one talent acted as he did out of fear. How many times are we slow to obey because of fear?

There have been numerous times when the Lord has prompted me to do something, or talk to someone, but fear held me back: Fear of failure. Fear of rejection. Fear of looking or sounding foolish. Yet God is faithful. When He calls us to something, He also provides the means through it. Even in sharing my own story I faced each of those fears. Obedience to His request would require faith in God’s goodness and provision greater than my fears stemming from my own inadequacies.

When He calls us to something, He also provides the means through it.

The servants who were entrusted two talents and five talents were both told “Well done.” There is nothing I desire more than to hear “Well done.” The quicker I am to obey, the sooner I will hear his words of affirmation. I must guard against burying what He entrusts to me in the sand and the wondering why He doesn’t trust me more.

The quicker I am to obey, the sooner I will hear His words, “Well done.” #mentalhealth

What is he entrusting to you today?