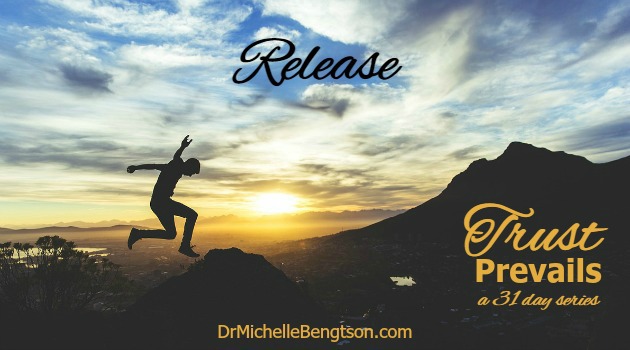 Those words of wisdom from a friend rained down from my head to my heart over the next 24 hours, the last 24 hours of my time at the beach with the Lord.

I had gone there for 3 days to get away, to get perspective, unsure of what I would hear, when she offered those words of unsolicited but very needed advice. She didn’t know the chaos that was pummeling me from every side like a summer hurricane. She knew only of one situation that neither of us were able to influence but wanted very much to try.

I’m not much of a big crier. Not that I think there is anything wrong with it, but my upbringing was such that tears were not tolerated, much less encouraged. I learned to be strong despite my pain. Now when I cry, I know one of two things (or both) are usually at play: either I’m truly at the end of myself, or the Lord is doing a deep work.

From the moment she spoke “Release,” the tears started to run down my cheeks. The more she explained, the harder the tears flowed until they were so fast and so thick that I could no longer see the beach on which I was walking. It might as well have been storming on that beach because it was in my heart.

It might as well have been storming on that beach because it was in my heart. #mentalhealth

Bless her heart, she wouldn’t know until a subsequent conversation how her words spoke into several areas of my life, not just the topic that originated our conversation.

Possible cancer? Release it. God is bigger than cancer.

Possible financial ruin? Release it. God takes care of the sparrows. Surely He watches over you.

Potential career change? Release it. God gave you your calling; He knows the plans He has for you and they are good.

A child being bullied? Release it. He is God’s child first and God cares for him even more than you do.

A child’s future pursuits? Release it. You’ve trained up your child in the way he should go and when he is old, he will not depart from it.

A new ministry endeavor? Release it. God called you to it, He will see you through it in His way, His timing.

“Release it.” What did that really mean anyway?

I knew what it meant. God was telling me the same thing He had been telling me those few days as I walked with Him along the beach, just in a different way: “Trust me.”

Somewhere along the line, I believed the enemy’s lie that I couldn’t trust God. But lately, the One who created me was beckoning me back to trust Him above all else.

Somewhere along the line I believed the enemy’s lie that I couldn’t trust God. #trustGod

In my worries and fears, I was projecting the enemy’s lies onto my future and believing them to be true. Yet He was challenging me to release my weighty concerns and trust what I couldn’t see but what I knew to be truth: God is good all the time.

You see, fear and faith both equally long to be expressed. But we have a choice. One is from the enemy who seeks only to steal, kill and destroy while the other comes from our loving Father who desires only good for us. It’s a choice.

Fear and faith both equally long to be expressed. But we have a choice. #mentalhealth #fear #faith

Release it. What do you need to release today and trust God for?

Because of Him, Hope Prevails!

A short brief about Hope Prevails.

Speaking from personal and professional experience, a neuropsychologist unpacks what depression is, shows how it affects us spiritually, and offers hope for living the abundant life.Set featured image

Neuropsychologist Offers Hope to Those Struggling with Depression
-By 2020, depression will be our greatest epidemic worldwide

In Hope Prevails, Dr. Bengtson writes with deep compassion and empathy, blending her extensive training and faith, to offer readers a hope that is grounded in God’s love and grace. She helps readers understand what depression is, how it affects them spiritually, and what, by God’s grace, it cannot do. The result is a treatment plan that addresses the whole person—not just chemical imbalances in the brain.

For those who struggle with depression and those that want to help them, Hope Prevails offers real hope for the future.

Hope Prevails is available now wherever books are sold. To find out more, see: https://drmichellebengtson.com/hope-prevails-book/.