12 Tips for How to Spot a Narcissist Early 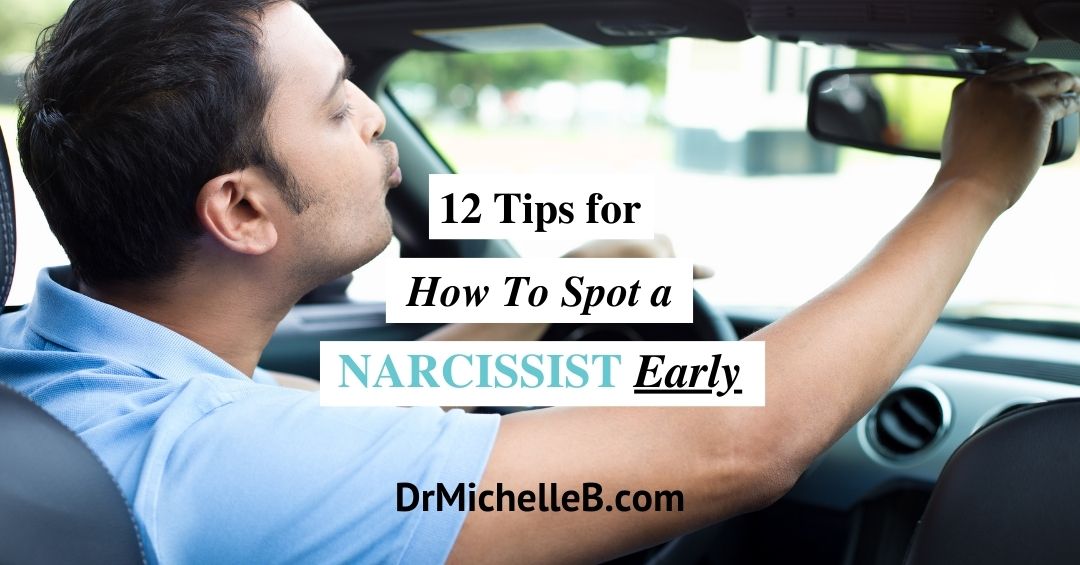 In today’s world, it’s easy to get caught up in the quest for self-adulation and admiration. With social media platforms like Instagram and Facebook, we are constantly bombarded with images and messages that promote the idea that we need to put our best foot forward and project an image of success and perfection. It’s no wonder that so many of us are susceptible to falling prey to the charms of a narcissistic personality.

Narcissism is a personality disorder that is characterized by an inflated sense of self-importance, a need for excessive attention and admiration, and a lack of empathy for others. If you’re in a relationship with a narcissist, you may find yourself feeling devalued, invisible, and even worthless. People with narcissism often have a sense of entitlement and require constant validation and approval. They may be preoccupied with power, success, and appearance. Narcissistic personality disorder is a mental disorder that is diagnosed more often in men than women. But it’s important to realize than many people may have narcissistic traits or tendencies even if they don’t meet diagnostic criteria for a narcissistic personality disorder.

While it’s not always easy to spot a narcissist early on, there are some telltale signs that you can look out for. If you’re wondering whether or not your partner may be a narcissist, here are a few things to look out for:

Are All Narcissists Men?

Narcissism is often associated with men, but is it really only a male trait?

Narcissism is defined as having an inflated sense of self-importance, a need for admiration, and a lack of empathy. It’s a personality disorder that’s characterized by grandiose behavior, a sense of entitlement, and a preoccupation with power and success. Narcissists are often described as egotistical, self-centered, and arrogant.

Are There Different Types of Narcissism?

Does Abuse by a Narcissist Only Occur in Marriage Settings?

How Frequently are Women the Target of Domestic Abuse?

It is estimated that one in three women will experience domestic abuse in their lifetime. This means that women are the target of domestic abuse more frequently than men. This equates to approximately 1.6 million women between the ages of 16-74 in the United States alone. Domestic abuse can take many forms, including physical, emotional, sexual, and financial abuse.

Narcissism has become a pop psychology term that’s being thrown around and shared all over social media. So let’s break it down.

What’s the difference between domestic abuse and narcissistic abuse?

What’s the impact and effect of narcissism on intimate partner relationships?

The impact of narcissism on intimate partner relationships is far-reaching and profound. Narcissism is a personality disorder characterized by an inflated sense of self-importance, a need for constant admiration and attention, and a lack of empathy for others. Individuals with this disorder can be extremely difficult to be in a relationship with and often create a great deal of chaos and destruction in their wake.

Individuals with narcissism often lack empathy and consideration for their partner’s feelings and needs, and can be excessively demanding and critical. They may also be prone to infidelity and emotional or physical abuse.

The abused often begins to question themselves and everything they thought to be true. They often experience guilt, shame, and loss of self-esteem. They often then doubt their worth and devalue themselves because they have been devalued by their partner. If you are in a relationship with someone with this disorder, it is important to seek professional help to deal with the challenges that you will face.

We often think of domestic abuse in terms of physical violence. But emotional abuse can be harder to spot.

What is emotional abuse? It’s defined as a pattern of behavior that can include manipulation, put-downs, intimidation, and isolation. An emotionally abusive relationship can be just as damaging as a physically abusive one.

Emotional abuse can be hard to spot because it often happens in private. It can be hard to identify because the abuser may try to make you think it’s your own fault, or that you’re being too sensitive. But it’s important to recognize emotional abuse for what it is—a serious problem that can have lasting effects.

If you’re not sure whether you’re in an emotionally abusive relationship, here are some signs to look for:

If you’re experiencing any of these things, it’s important to reach out for help. There are many resources available to help you if you’re in an abusive relationship. You don’t have to suffer in silence.

12 tips for how to spot a narcissist early

What Are the Traits of a Narcissist?

Narcissism is on the rise. According to a recent study, 1 in 40 adults in the United States are diagnosed with narcissistic personality disorder. And with the rise of social media, it’s become even easier for narcissists to get the validation they crave.

Narcissism is a personality disorder that is characterized by an inflated sense of self-importance, a need for excessive attention and admiration, and a lack of empathy for others. People with this disorder often believe they are superior to others and have a strong sense of entitlement. They may take advantage of others to get what they want and may use others to boost their own ego. Narcissists can be difficult to spot, but there are some warning signs that you should be aware of:

It’s a common tactic used by narcissists to control their partners. And it’s effective because it works to undermine your confidence and make you doubt your own perceptions and reality.

It’s important to remember that you’re not crazy, and that you’re not imagining things. Gaslighting is a real phenomenon, and it’s a form of emotional abuse. This is when they try to make you question your own reality and memory. For example, they might tell you that you said something that you didn’t say, or they might deny ever saying something that they did say. This can be very confusing and can make you doubt yourself. If you are in a relationship with a narcissist, it is important to remember that you are not crazy, and that you are not the one who is wrong. If you’re being gaslighted, it’s not your fault, and you’re not responsible for fixing the problem. The only person who can change the narcissist’s behavior is the narcissist themselves.

If you’re in a relationship with a narcissist, there are a few things you can do to protect yourself from their gaslighting tactics.

First, it’s important to be aware of what’s going on. If you can recognize the signs of gaslighting, it’ll be easier to stand up for yourself and defend your reality.

Second, it’s important to build a support system of friends and family members who you can rely on to tell you the truth. These people can help you to see the reality of your situation, and they can provide a reality check when you’re being gaslighted.

How does the Biblical picture of love compare to love from a narcissist?

We read in 1 Corinthians 13:4-8a “Love is patient, love is kind and is not jealous; love does not brag and is not arrogant, does not act unbecomingly; it does not seek its own, is not provoked, does not take into account a wrong suffered, does not rejoice in unrighteousness, but rejoices with the truth; bears all things, believes all things, hopes all things, endures all things. Love never fails.”

When we truly love others, out of the love God has given to us, we extend the best of who we are and believe the best in others. We offer compassion, kindness, forgiveness, and sacrifice. But a narcissist typically exemplifies all the things in that passage that we are told NOT to do. They are motivated by selfish ambition, whereas we are told to do nothing out of selfish ambition, loving others as we love ourselves. The narcissist on the other hand demands love but is generally unwilling to extend that kind of love.

Can a Narcissist Control Their Behavior?

At the root of narcissism are the spirits of pride, arrogance, rebellion, manipulation, control, and deceit. Narcissistic individuals can control their behavior but have no motivation to because they get what they want through their behavior so their needs are met. Narcissistic personality disorder is a very difficult clinical diagnosis to treat because those with NPD don’t think there is anything wrong with them so they have no motivation to participate in therapy, accept professional advice, or change.

Narcissists are often very charming and charismatic at first glance, but there are usually some warning signs that can help you spot them early on. They tend to be very self-centered and have difficulty empathizing with others, and they may try to control or manipulate those around them. If you suspect that someone you know may be a narcissist, it’s important to pay attention to how they interact with others and to their overall behavior. If you’re concerned about someone’s behavior, it’s always best to talk to a professional to get their opinion.

If you think you might be in a relationship with a narcissist, it’s important to be aware of these signs so you can make a decision about whether or not to stay in the relationship. If you’re in a relationship with someone who exhibits these qualities, it’s important to get help (Text START to 88788 or contact thehotline.org). Narcissistic personality disorder is a serious mental illness that can be extremely destructive to both the narcissist and those around them.

Are you worried you might be in a relationship with a #narcissist? Here are some early warning signs to look out for, so you can avoid getting too attached to someone who isn’t good for you. #mentalhealth

What is #narcissism? Are all narcissists men? What’s narcissistic abuse? In this article, I share answers to these questions as well as tips that will help you spot a #narcissist early. #mentalhealth 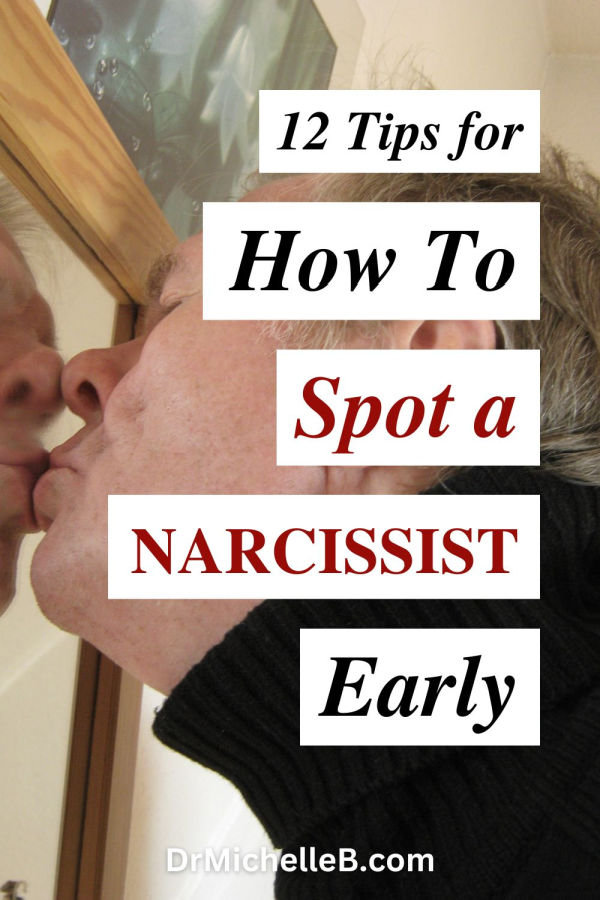