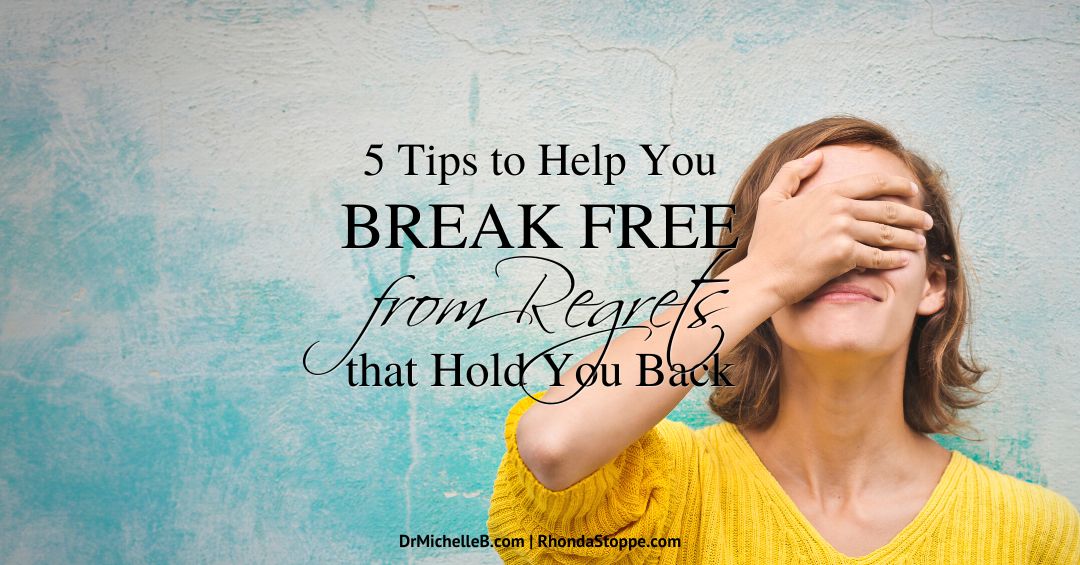 Rhonda Stoppe, known as the “no regrets woman,” has more than 30 years of experience helping women build no regrets lives. She shares 5 battle-ready tips that will help women who are stuck in regret and shame break free from those regrets that are holding them back. If you’re stuck in regret, you don’t have to stay there. It’s time to break free. Start working through these tips today!

Be sure to read to the end for a book giveaway!

Theresa tried so hard to quiet her regretful thoughts. How is it that, even 20 years later, she battled the voice in her head reminding her of the choice she made as a teen? She was only fifteen when she became pregnant. Dropping out of school to raise a child did not seem like an option. That choice just didn’t fit into her future goals.

Watching her own single mother struggle confirmed in her mind that raising a child on her own was out of the question. Without any counsel from her mother, or anyone else, Theresa had quietly eliminated her pregnancy.

At the time, Theresa was convinced that the choice was the right one for her. It wasn’t until years later that she allowed herself to consider the loss of her first child.

The secret––which she had guarded so closely––began finding its way out of the dark crevices of her mind and into the forefront of her thoughts. She contemplated, What other choice did I have? It’s in the past. Why can’t I shake this regret?

Although Theresa attempted to quiet her shameful thoughts, the enemy seemed to accuse her at every turn, “You were a Christian when you made that choice. You should have known better.”

“No one can ever know the truth about you,” she regularly reminded herself.

One day, Theresa met a woman named Kim, who would change her life forever. Kim, who had the kindest eyes, moved next door to Theresa’s condo. The two became fast friends. Over a cup of tea one afternoon Theresa said, “I envy you Kim. You seem to have lived a life without regrets. I’ve made so many mistakes, sometimes I get stuck in my head and I can’t shake the guilt.”

Kim replied, “Theresa, if you only knew the mistakes I’ve made. I was raised in a Christian home. I had given my heart to Christ at a young age and yet, as a young adult I made so many regretful choices. When I came to my senses and turned back to Christ, Satan’s haunting accusations kept me paralyzed with regret and shame.”

Kim went on, “However, I learned to battle those accusing regrets by memorizing scripture. And with God’s strength He has helped me break free from regrets that held me back. I’m confident He can do the same for you.”

From that day on, Kim became Theresa’s mentor and a lifelong friend.

Maybe you can relate to Theresa’s story of regret and shame. Whether it’s regretful words or actions that you wish you could take back, do you find yourself stuck in remorseful thoughts? Do you wonder if God could ever use someone like you? You’re not alone. And just like Kim and Theresa, there is help and hope for you too. Let’s quickly unpack five tips to help you break free from regrets that may be holding you back.

1. Repent. If you’re stuck in a place of regretting a past sin, if you’ve not done so already, the first thing you must do is repent. This means to agree with God that you have sinned against Him and determine that you will no longer continue in that sin. And then thank Him for His forgiveness. Asking God to forgive you must be coupled with a genuine resolve to turn from your sin and walk in obedience to Christ.

With true repentance comes real cleansing of sins. Psalm 51:7 promises when He washes your sins away you shall be whiter than snow. Isn’t that exciting?

2. Learn from stories of others who have broken free from regret. When King David sinned with Bathsheba, he regretted his sin, yet he hid it for over a year. Can you imagine the ache David must have endured while he pretended to be a godly king? David describes this shameful season, “When I kept silent, my bones wasted away through my groaning all day long. For day and night Your hand was heavy upon me; my strength was dried up…” (Psalm 32: 3-4).

It wasn’t until David finally repented to the Lord that he asked for forgiveness, “I acknowledged my sin to You, and I did not cover my iniquity; I said, ‘I will confess my transgressions to the Lord,’ and You forgave the iniquity of my sin” (Psalm 32:5).

Once David cried out for mercy, and was cleansed by God, he was filled with incredible joy, praised God and was ready to teach others His ways (see Psalm 51:1-17).

Stuck in his regret, David was miserable and ineffective, but when he repented and truly believed that God had forgiven him, he was a powerful witness of The Lord––and the same can be true for you.

3. Memorize Scripture. Ephesians chapter six reminds us that our battle is not against flesh and blood but against spiritual forces of evil. Ephesians 6:10-11 says, “Finally, be strong in the Lord and in the strength of His might. Put on the whole armor of God, that you may be able to stand against the schemes of the devil” (ESV).

Realize that your regretful thoughts may be a scheme that Satan is using to keep you stuck in shame so he can render you ineffective for what God would do through you for His Kingdom and His glory.

The best way to combat the enemy’s lies is by hiding God’s Word in your heart. Then, when you become bombarded with regretful thoughts, recite aloud passages of scripture that you have memorized. And sing worship songs that are filled with scripture. This single practice has proven effective in squelching the enemies lies more times than I can record. And I believe that it will do the same for you.

4. Take Your Thoughts Captive. In 2 Corinthians chapter 10 the Apostle Paul acknowledges that the war we wage is not of the flesh. And in verse 4-5 Paul offers this helpful advice: “For the weapons of our warfare are not of the flesh but have divine power to destroy strongholds. We destroy arguments and every lofty opinion raised against the knowledge of God and take every thought captive to obey Christ.”

This advice is not, “pull yourself up by your bootstraps and try harder not to think about it.” Rather, Paul acknowledges how your thoughts can become a stronghold. But by the divine power of Christ in you, He has given you everything you need to cast those defeating thoughts at the feet at Jesus, refusing to entertain them any longer.

5. Find a Godly Mentor. In Titus chapter two it teaches that the older women are to teach the younger. Here’s the thing, if I write a letter to my younger self about all the regrets I wish I could do over it is of little value. However, if I write that letter and then give it to a younger woman who can learn from my mistakes, now that’s a treasure––right?

How do you find an older mentor who’s walked this path ahead of you? For me, when I was a young woman, I joined a ladies’ Bible study. As we met weekly the older women in the study shared what God was teaching them through the lessons, and they shared things God had taught them in their past. They were real, genuine and a wealth of help and wisdom.

If you spend time only with friends who are your age, you’re missing out on God’s apprentice training program through older mentors. So, make the effort to find them. If you’re not a regular church attender, begin there. Join a Sunday school class. Attend a weekly study. Ask God to help you find a mentor, and then humbly ask them for help. I can confidently say the friendships I made with older women, while I was young, were what God used to help me break free from regrets.

If you’re stuck in regret, it’s time to break free. Ask God to help you genuinely repent of any unconfessed sin, read biographies and biblical accounts of people who broke free from own their regrets, battle your regretful thought by memorizing scripture. And take your thoughts captive to Christ. And finally, ask the Lord to send you a godly mentor from whom you can learn the path to a life without regrets.

How have you broken free from regrets that tried to hold you back? We’d love to hear in the comments below.

Are you stuck in #regret and #shame? It’s time to break free. @RhondaStoppe, the No Regrets Woman, shares 5 tips to help you break free from regrets that hold you back. #mentalhealth

@RhondaStoppe with 30+ years experience helping women build no regrets lives, shares 5 battle-ready tips that will help women who are stuck in #regret and #shame break free from those regrets that are holding them back. #mentalhealth 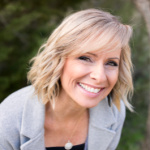 Rhonda Stoppe is the NO REGRETS WOMAN. With more than 30 years’ experience helping women build no regrets lives. “I could have listened to Rhonda talk all night, “ is what audiences say about Rhonda’s enthusiastic, humorous, transparent teaching, and zeal as an evangelist.

She’s committed to fulfill the Titus 2:4 commission by mentoring, teaching and writing books that are inspiring, grounded in Scripture and easy to read––like you’re visiting with a friend over coffee.

Rhonda is the author of 6 books and appears on numerous radio programs including: Focus on the Family, Family Life Today and Dr. James Dobson’s FamilyTalk, & hosts The No Regrets Hour. She’s an evangelist and speaker at women’s events, College Women’s Chapel, Pastor’s Wives Conferences, MOPs and Homeschool Conventions. Sharing the gospel at her NoRegretsWoman Conference is her sweet spot. Rhonda is a regular contributor for Crosswalk and many other magazines.

Rhonda ministers alongside her husband Steve, who for 20 years has pastored First Baptist Church of Patterson, California. They live out their own Real Life Romance writing books and speaking at their No Regrets Marriage Conferences, but their favorite ministry is their family. They have four grown children and 10 grandchildren. To learn more about Rhonda’s speaking topics, watch her teaching and to book Rhonda for your next event visit: NoRegretsWoman.com 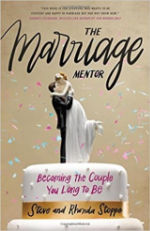 In conjunction with this post and the podcast interview, How To Break Free from Regrets that Hold You Back – Episode 174, Rhonda is giving away a free copy of her book, The Marriage Mentor: Becoming the Couple You Long to Be.

Leave a comment below sharing with us one thing you learned about breaking free from the regrets that hold you back and you will be entered into the contest for your chance to win a copy of her book.

The winner will be selected at random and announced next Monday, August 22, 2022. Continental United States only. 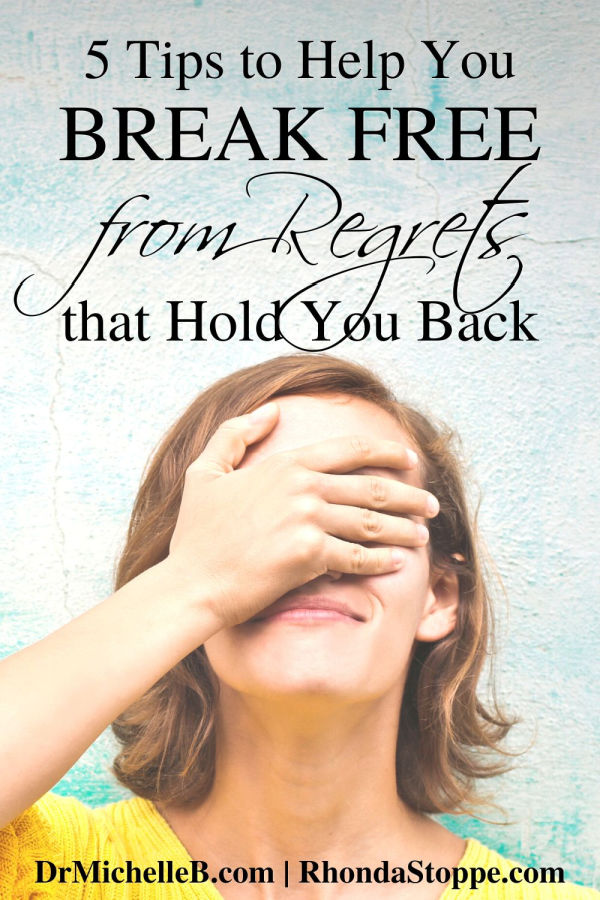