Trusting God Despite Our Feelings 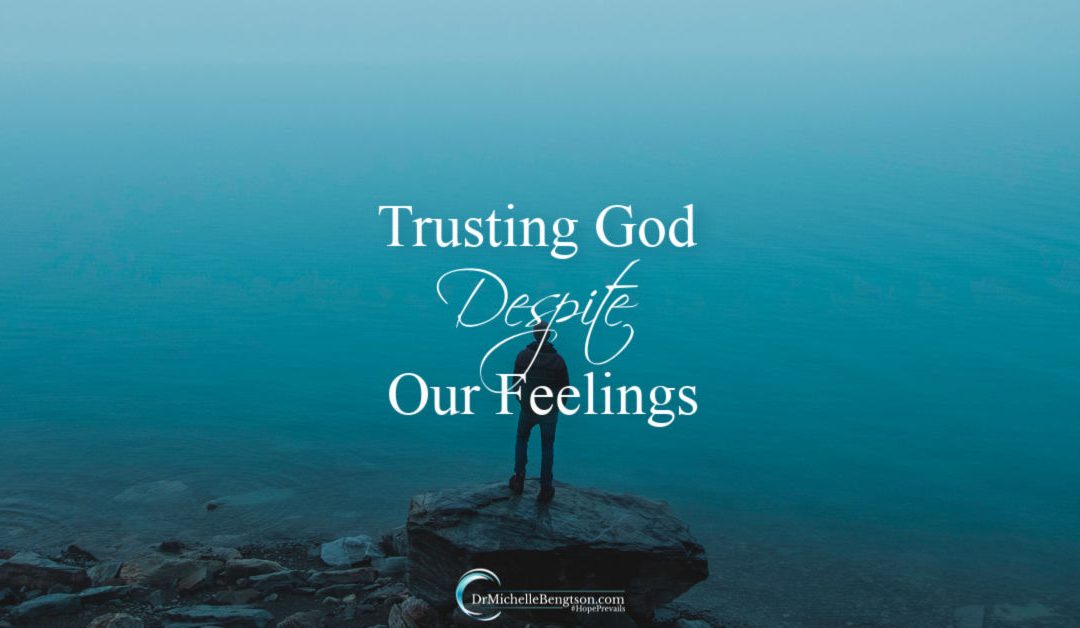 Sometimes, situations do not turn out the way we hoped or prayed. Will we trust God despite our feelings? Will we trust Him through our tears? Even when we cannot see His hand at work? We all face this choice at some point in our lives.

The summer immediately following high school graduation, and before his departure for college, my son enrolled in flight school to obtain his private pilot’s license. One day he graduated from high school, and the next he enrolled as a flight student while his peers vacationed, worked on their tans, and enjoyed a carefree summer. Obtaining this license before starting his freshman year of college would allow him to skip over many of the freshman basics, but it would also serve him well later in his college education by allowing him to work as a flight instructor, accrue flight hours, and ultimately help defray the cost of his education.

This was a lofty goal for him and us. Most pilots pursue such a certification over many months or years. He had only a couple of months. We plotted out the requirements, took weather cancellations into account, and realized that if he had any chance of making this happen it would require intentionality and dedication, even to the point of quitting his job and shortening our family vacation.

That week, however, we had one obstacle after another come against him from unexpected storms to the unavailability of their regular examiners to administer the practical test—none of which were in our control. The most nerve-wracking part of the situation was that he was prepared—the owner of the flight school and his flight instructor with whom he had worked daily throughout the summer both confirmed he knew the material. In fact, he woke up in the middle of the night talking in his sleep answering questions he anticipated being asked on the practical test. He said to me later, “Mom, I was literally answering questions in my sleep.”

Yet we were running out of time. According to the university’s policy, students had to walk on campus with a license in hand to be granted credit and to move on to the next level of training. There were no more days available for make-up flights and each piece of the end of the program required successful completion of the preceding component. So if one flight didn’t happen, everything had to be rescheduled. Yet each day, clouds swelled and storms popped up out of nowhere. Several close friends prayed in agreement for him and with me over the phone as I wrung my hands and worried over the ultimate outcome. I couldn’t bear the thought of all this summer’s effort and expense being for naught.

Our last day came and went, and the results were not what we had hoped. We would leave in the morning without a license in hand, feeling a bit crushed in spirit. He had never wanted anything so badly in his life, and honestly, I had never prayed so hard, so long, so continuously for anything for him prior to this. This license and what it represented was a big deal—the desire of his heart, and ours. And yet, for whatever reason, it wasn’t meant to be.

Have you ever felt let down by God?

I’ll never forget as he drew me in for a hug and apologized to me, knowing the expense it caused and would cause in the future. That was the least of my concerns at that point. I cared more that he knew that I was pleased with him. He had given his all, and if he’d had a few more days, I knew the result would’ve been different. As his mother, I couldn’t have been more proud. And yet, what I didn’t want him to know was that I felt let down by God. He knew what my son needed. He knew what was on the line. Surely He had heard our prayers.

Sometimes, when my heart is broken and my prayers are reduced to nothing but honest tears, the best thing I can do is get away for a time of solitude with Him, to where I best rest in His peace. For me, that usually entails sitting by a lake somewhere while the water laps on my feet, as I clear my mind to receive whatever He has for me. In the deep recesses of my soul, I knew He is sovereign over all. Nothing takes Him by surprise, and He doesn’t wring His hands wondering how He will bring good from my painful circumstances.

When worry distracts your heart

As we stepped through the tasks of that week, a friend texted me and commented about it being a “big week” for our family. I reflected back to her that we didn’t seem to do anything small in our family. Throughout this situation, I frequently thought back to the familiar story of Mary and Martha.

“As Jesus and the disciples continued on their way to Jerusalem, they came to a certain village where a woman named Martha welcomed him into her home. Her sister, Mary, sat at the Lord’s feet, listening to what he taught. But Martha was distracted by the big dinner she was preparing. She came to Jesus and said ‘Lord, doesn’t it seem unfair to you that my sister just sits here while I do all the work? Tell her to come and help me.’

But the Lord said to her, ‘My dear Martha, you are worried and upset over all these details! There is only one thing worth being concerned about. Mary has discovered it, and it will not be taken away from her.” (Luke 10:38-42) In the NLT it says “Mary has chosen what is better…”

In all honesty, as much as I desire to reflect a Mary heart, that week in particular I could’ve been Martha’s twin. I fretted and paced and called in the reinforcement to pray with and for us. Sometimes as a parent, nothing will tempt us to worry like a concern for our children. Just like Martha, rather than worshipping and praising, I let the concerns that preoccupied my mind distract my heart. And when the results didn’t go as I’d asked or hoped for, I all but echoed Martha’s complaint, “Lord, doesn’t it seem unfair to you?”

Will you trust God despite your feelings?

As I sat with that truth, I had a choice to make. I had to choose to believe truth. The problem is, when I worry, I’m believing the enemy’s lies. The enemy was screaming, “God doesn’t care. If he cared, you would’ve gotten the answer you wanted.” Instead, I had to choose to believe the truth of God’s worth which brought a return of peace: God is sovereign. He is for me and my son. He knows the plans He has for me and my child and they are not only good, but they are for a future and a hope. AND, He promises to work all things together for our good–even unfortunate situations. So my answer, through my tears, was a prayerful, “Yes, Lord. I trust you. And I praise you in and through the storm. May the seeds that have been planted in faith be watered by these rains to grow a harvest for your glory.”

Trusting God despite your feelings…even when you feel like He let you down. #HopePrevails #trustGod

What choice will you make when facing situations that don’t turn out the way you planned? #trustGod 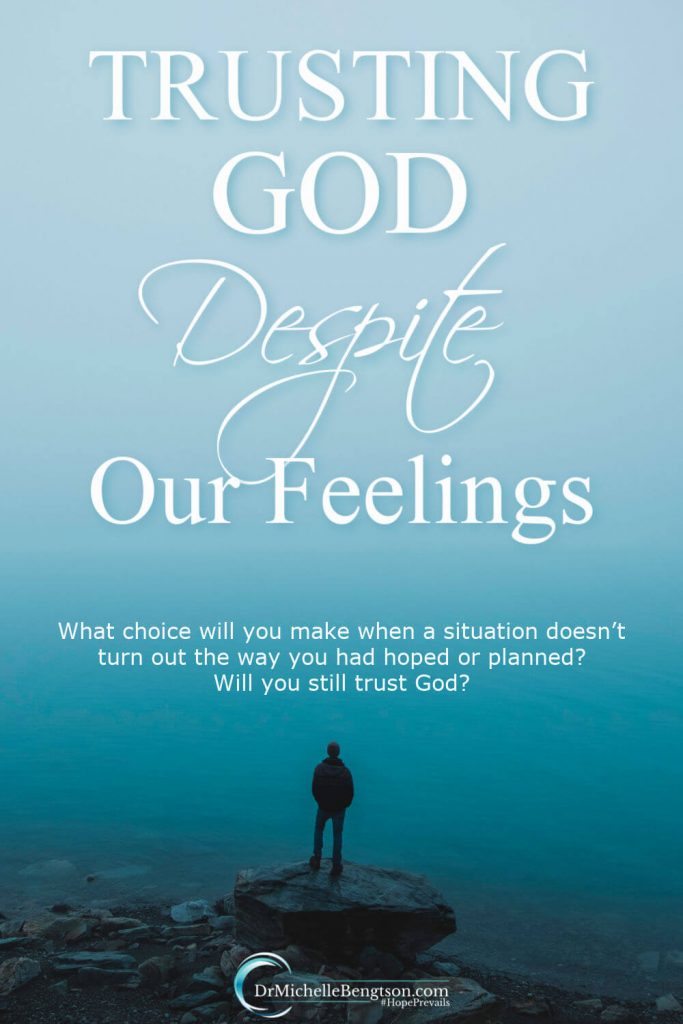