CHANGE: The GOOD, The BAD, and The UGLY 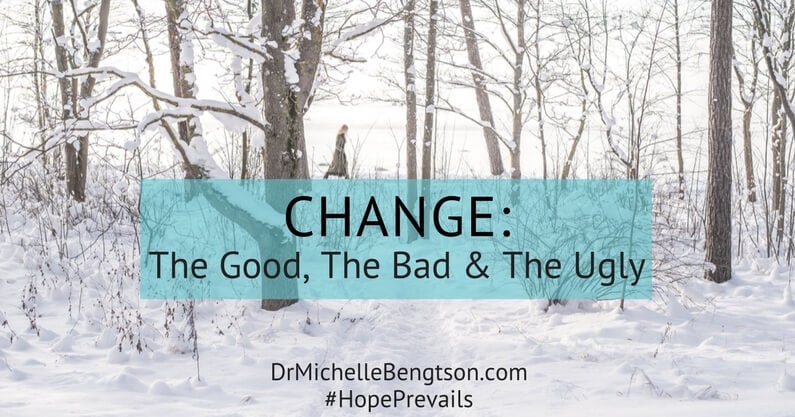 I still cannot believe that it is already 2012! I’ve always heard that time passes more quickly the older you get, but this is ridiculous. I can still recall putting the Christmas decorations away from a year ago as if it were last week (perhaps because that’s when we put this past Christmas’s decorations away, but you get the point).

This past New Year’s my oldest son mentioned needing to come up with his “New Year’s Resolutions,” and the couple he shared with me were quite laudable. His mentioning New Year’s Resolutions got me thinking. It’s been a few years since I seriously paid much attention to making my own resolutions. Perhaps because of the years of experience of failed resolutions: I’m going to lose __ pounds, I’m going to drink more water (last year’s resolution, highly unsuccessful!), I’m going to get back to a regular, healthy sleep schedule (also last year’s resolution, also unsuccessful!), I’m going to quit eating fried food (several years ago, and fairly successful), I’m going to exercise every day (several years ago, successful or not depending on what was going on in my life, which I guess in and of itself means not terribly successful), etc. etc. The idea of New Year’s Resolutions is to make a promise to yourself to make a generally positive change from your old way of doing things. Some people are much more successful at that than others, but then I suspect it is all dependent on how far the departure is from the norm.

New Year’s Resolutions really signify change. If I’m honest with myself and you, I’m not a huge fan of change. I usually like “the same old, same old.” Whether we are talking about what I usually order at a restaurant (what if I try something new and don’t like it? Then I’ll really wish I had ordered what I know I always love!), or the brand of bathroom tissue (definitely has to be soft!), or when I send out Christmas cards (I know that one really bugs some of you, while the rest of you, come on, admit it, find some sort of comfort in knowing that you’ll get the Bengtson card right after Thanksgiving to signal the start of the wonderful Christmas season!). Now while I don’t usually seek out change, and generally don’t prefer it, I do Usually come around and embrace the new idea, new item, new way of doing something.

I’ve pondered what it is that makes people either love and endorse change, versus those of us who are not the most comfortable with it. While I hate to admit it, I think when you boil it down, it all comes back to the need for control. Not that I really desire to control everything or everyone (too much responsibility!!), but sameness, a lack of change, may be equated with stability, predictability, and for many, that results in peace and comfort. Change suggests the opposite…instability, variability, unpredictability, maybe even chaos.

As I often explain to many of my patients, anxiety usually stems from a feeling of being out of control. Whether it is a fear of heights, or test-taking anxiety, or anxiety from being stuck in traffic and potentially being late for an important appointment or meeting, the anxiety comes because we don’t feel like we are in control in those situations. A very common, albeit not incredibly adaptive means of coping with anxiety then is withdrawal. By withdrawing from the stimuli or the situation that breeds anxiety in us, the anxiety no longer has a reason to exist. I HATE snakes, and have what I would consider a healthy fear of snakes. I will never be the mother who has the reptilian (??) man come to her son’s birthday party! By avoiding snakes, I don’t feel anxious…the anxiety has no reason to exist. Unfortunately, withdrawal or avoidance doesn’t usually prompt any adaptive coping mechanisms. If I always avoid the snakes, I don’t feel the pressure to learn which ones are totally harmless and not to be feared versus those that I should be cautious around (or perhaps totally avoid being in their presence!!) So then, since I didn’t learn about them, every time I encounter one I experience anxiety.

Change can, for many people, induce anxiety. It can prompt the endless loop of “What if?” questions. The problem is, you can never exhaust or plan for all the possible what ifs. But it all comes back to the lack of feeling in control.

As I get older, I’m becoming more comfortable with the idea of embracing change. I prefer to be in control of what change I embrace, but the truth is, many times, no forethought, no planning, no “heads up” is available prior to significant change. At the office, where change occurs every day, often many times a day, I’ve tried to instill the philosophy in my staff of “Be Flexible and Modify.” Just yesterday I was reminded of the motto “Blessed are the flexible, for they shall not be bent out of shape.” We can’t resist the change in the schedule…it’s going to happen anyway, so go with it and modify accordingly. It creates less stress, and definitely less anxiety.

The year 2011 passed by so incredibly quickly, yet as quickly as it flew by, I personally endured a great deal of change in my life, as did my office, most of it not of our own choosing. Sometimes I embraced it quickly, problem solved and figured out what had to be done and did it, other times I was a little slower to come around, but for the most part, each one of those scenarios left me/us better than we had started off in some way.

So as I sit here at the start of the third week in January, 2012, I wonder what change I will encounter this year, both planned and that which is forced upon me. Do I “take control” and help decide what change I’d like to see? In essence, do I make any resolutions? Do I grab my fear and face it head on? By facing it head on and deciding what I’m willing to do about it, the anxiety has no reason to exist. So what have I got to lose?

I have heard a statistic (don’t quote me on the exact figure) that less than 5% of people who set goals (a.k.a. resolutions perhaps??) meet them, and the difference between those who do make the change and meet their goals and those who do not, is largely impacted by whether or not those goals were written down. Those who put their goals in writing succeed to a much greater extent than those who don’t. I’m going to go for it. Here in black and white for you all to see, I resolve to write more this year to build my craft and hopefully to encourage more people.

What change are you going to embrace to make 2012 a better year than last? Write it down. Let me know and I’ll be cheering along with you!